Warriors go down to the wire

Warriors go down to the wire 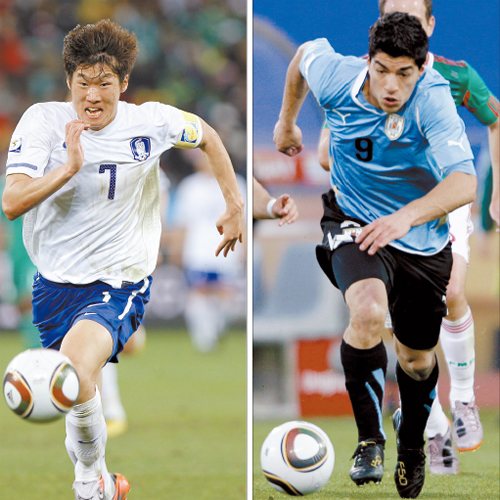 Korea’s captain Park Ji-sung, left, is the heart and soul of the national team while Luis Suarez is expected to play a big role with Diego Forlan for Uruguay. [YONHAP]

It’s the knockout rounds, and the stakes are higher. As they go up against Uruguay at the World Cup tonight, the Taegeuk Warriors not only face a team they’ve never beaten, but the need to surpass the goal they’ve already met.

With a spot in the quarterfinals on the line, the Korean national football team will attempt to end a five-game winless record - one tie and four losses - against La Celeste when they kick off at Nelson Mandela Bay Stadium in Port Elizabeth at 11 p.m. (Korea time).

“Uruguay is a well-balanced team with strong offense and defense. But we’re also a team that has advanced to the Round of 16,” said manager Huh Jung-moo.

“There will be many people back home supporting us late into the night, and we should repay them for their support.

“I told my players not to let them down.”

Huh is expected to go with two forwards in a 4-4-2 formation that features Park Chu-young and Yeom Ki-hun up top. After failing to score in the first two matches, Park found his form when he notched a goal off a curling free kick against Nigeria on Wednesday.

Korea has proven effective in set-piece situations, producing three of its five goals in the group phase off free kicks. Tonight, the team will look to its speedy midfielders to initiate the attack up the sidelines and take full advantage of resulting set-piece plays.

“Uruguay is not an easy opponent but we match up better against them than Mexico,” Lee said after practice yesterday. “Uruguay didn’t let in a single goal in the group stage, but there are open spaces when their fullbacks overlap. I think we can take the initiative and set the pace.”

As for defense, Huh can choose between Oh Beom-seok or Cha Du-ri at right fullback, or shift Lee Young-pyo to right fullback and give Kim Dong-jin the start opposite Lee.

“We might make one or two changes in the starting lineup,” said Huh. “We’re also preparing for the possibility that the game could go into penalty kicks.”

Diego Forlan and Luis Suarez are the recognizable names tonight, and the Korean defenders will have to keep a close eye on them if they want a shot at upsetting the South Americans.

“We don’t have any injuries and we avoided facing Argentina in the second round, but you just never know how the match will turn out,” said Uruguay manager Oscar Tabarez.

“We’re analyzing the Korean team, but we don’t have a whole lot of time to prepare. There’s a possibility they’ll try something different from what I’ve seen on films.”

Despite the state-run weather agency’s rain warning for tonight, police are expecting more than 1.8 million people to gather at 226 outdoor venues across the country - the largest turnout yet for the 2010 World Cup.

But while some police attributed the numbers to the fact that this game falls on a weekend, some fans said they’ll be on the streets to cheer for reasons other than the ability to sleep in tomorrow. “I prefer to watch football matches at home with my friends and family, but I’ll sit down on the streets near COEX tonight because this game could be Korea’s last,” said 26-year-old Chung Jae-ryung of Seoul.