Game ends in tears, but the dream goes on

Game ends in tears, but the dream goes on 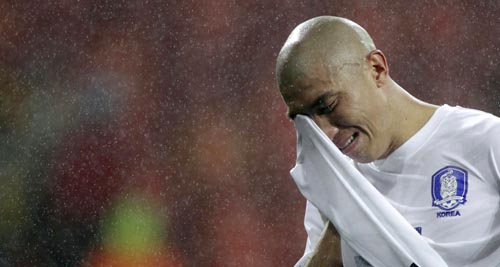 Cha Du-ri cries on Sunday after the Korean national football team dropped out of the 2010 World Cup after losing to Uruguay in Port Elizabeth. [REUTERS/YONHAP]

The Taegeuk Warriors’ run at the 2010 World Cup came to an end with a loss to Uruguay in the Round of 16, but they leave South Africa with their heads held high.

Korea lost a hard-fought match to Uruguay 2-1 in Port Elizabeth on Saturday night, but there’s a sense of optimism about the young team and the direction it’s headed.

“Raise your heads, you guys should not be embarrassed of the result of the game today,” manager Huh Jung-moo told his dejected players in the locker room after the game. “I’m happy to have competed in the World Cup with good players like yourselves.”

“Although they were defeated, they fought well,” President Lee Myung-bak was quoted as saying at the G-20 Summit in Toronto, Canada. “I send a message of encouragement to our spirited players who did their best to the end.”

Although team captain Park Ji-sung hinted that he has competed in his last World Cup, the core will continue to learn overseas, and that should make a difference in how Korea fares in Brazil in 2014.

“It feels sad and regrettable that my run at the World Cup has come to an end,” said captain Park. “We showed at this Cup that the gap in quality of football in Korea and other parts of the world has narrowed.”

Up against a well-organized Uruguayan side that had not given up a single goal in the group phase, Korea took charge early and set the pace of the match. Korea nearly scored the opening goal merely minutes into the match when Park Chu-young’s free kick from 18 meters, or 20 yards, hit the post. Barely minutes later, Diego Forlan connected on a cross to Luis Suarez, who tapped in the opening goal in the eighth minute.

Korea gained momentum and looked stronger as the game wore on, while many of the Uruguayan players lost their pace. Lee Chung-yong headed in the equalizer in the 68th minute to tie the game at one goal apiece, and Korea seemed to have a firm hold of the game. However, Suarez scored the game winner in the 80th minute off a defensive lapse by Korean defenders.

“We played well and dominated the match, but we failed to score when opportunities presented themselves and allowed easy goals,” manager Huh said in a post-match interview. “I want to thank the players and apologize to the fans back home who supported us late into the night.”

“Korea played a great game,” said Uruguay manager Oscar Tabarez. “We were lucky on several occasions. Football is like that.”