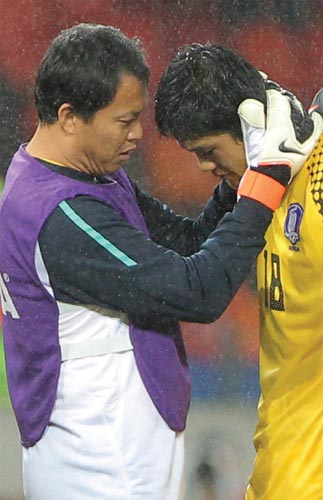 Jung Sung-ryong is consoled by veteran reserve Lee Woon-jae after the loss to Uruguay on Saturday. [YONHAP]

PORT ELIZABETH, South Africa - It’s only natural for critics to come out of the woodwork after losses. It’s part of the game. One poor showing can lead to demoralizing criticisms of the manager or the players.

In the second Group B match against Argentina on June 23, a lot of blame was placed on Park Chu-young and Yeom Ki-hun. Park deflected the ball into his own goal early in the game, and Yeom failed to score on a golden opportunity in the second half with his team trailing 2-1.

In the third and final Group B match against Nigeria on June 28, it was the defense. Right fullback Cha Du-ri was caught out of position for Kalu Uche’s opening goal of the match, while Kim Nam-il’s errant tackle from behind in the penalty box resulted in the tying goal off a penalty kick.

After the Round of 16 loss to Uruguay, Jung Sung-ryong, Kim Jung-woo and Lee Dong-gook are under the microscope. The three players did not play their best game, but football fans need to realize that there are plenty of football games after the World Cup, and the aforementioned players will continue to play on the national team in the future.

It did not take long for Uruguay to score the opening goal. After Park Chu-young’s free kick hit the post, Uruguay came back and scored in the eighth minute. Diego Forlan made a low cross from the left side of the field. The cross looked like it could have been stopped by Jung, but it went past the outstretched goalkeeper before Luis Suarez scored on an open net.

Some have asked why Jung had not positioned himself better to stop the pass. The answer is based on Forlan’s position. Since Forlan had gotten past Kim Jung-woo on the play, he was in position to move in and attempt a shot from the left side of the penalty area. For that reason, Jung could not pursue the play as many thought he should have.

“I stretched my leg out but failed to stop him. I thought I had taken care of Suarez as he attempted to dribble further into our zone but I slipped and didn’t make good contact on the ball,” said Kim in a post-match interview.

Usually a reliable defensive midfielder who also contributes on offense, Kim’s defense was short of his usual level of play, but credit must be given to Suarez. His curling shot was unstoppable and should be ranked among the best goals of the 2010 World Cup thus far.

Veteran forward Lee Dong-gook got a chance in the 41st minute to tie the game at two goals apiece. Lee received a pass from Park Ji-sung and was in a one-on-one situation with Uruguay goalkeeper Fernando Muslera. Having made it to the World Cup for the first time in 12 years, it was a great chance for Lee to contribute an important goal for the team and the fans. However, the shot deflected off Muslera’s foot and trickled towards the goal before it was cleared by a defender.

“Due to the rainfall, the ground was wet. I thought it would be best to attempt a hard low shot,” said Lee. “It really hurts to have missed out on a chance to score.”