S. Korea eliminated from World Cup after 2-1 loss to Uruguay

S. Korea eliminated from World Cup after 2-1 loss to Uruguay 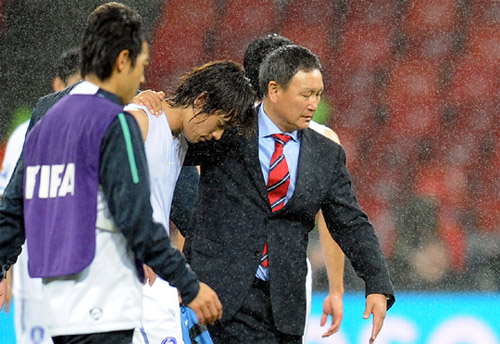 
South Korea failed to advance to the quarterfinals of the World Cup in South Africa Saturday after a 2-1 loss to Uruguay at the Nelson Mandela Bay Stadium.
In its first round-of-16 match in away tournaments, South Korea put up a strong offense against Uruguay after conceding its first goal just eight minutes after the kickoff. The South Korean squad, Group B's runner-up, tied the game early in the second half but lost its second point with just 10 minutes left.
"It was a good game," Huh Jung-moo, the South Korean coach, said at a post-match press conference. "We had lots of opportunities ... I think Uruguay was lucky enough to put in the goals. I really want to congratulate our team for doing their best."

Huh observed that his players "led the game in the second half," but expressed regret that they were not able to translate that effort into goals.

The Asians made it to the semifinals of the South Korea-Japan World Cup in 2002 but had never reached the knockout stage in away tournaments despite having played in six straight World Cup tournaments from 1986 to 2006.

"I stress this," said Oscar Tabarez, coach of the Uruguayan team, No. 1 in Group A. "I think Korea did very well. Perhaps we were lucky and they weren't lucky in some of the moves. But that's football."

Luis Suarez put Uruguay in the lead in the eighth minute as he netted a goal from Diego Forlan's cross that was poorly managed by South Korea's defense and goalie.

The South American squad's offense appeared to lose steam in the second half, while South Korea pushed harder, leading the pace.
The Korean offense bore fruit when Lee Chung-yong headed home in the 67th minute, leveling the match under drizzling rain and raising expectations of overtime.

Suarez, however, dashed South Korea's hopes again by scoring in the 80th minute, curling a right-footer to the right edge of the South Korean goal guarded by Jung Sung-ryong.

The South Koreans, along with some 500 supporters, fell to the ground as the whistle signaled the end of the match.

The Koreans had many missed opportunities. A free kick by AS Monaco Park Chu-young in the fifth minute rattled the upright area of the Uruguayan goal post. A decent header by captain Park Ji-sung was met by the hands of Uruguayan goalie Fernando Muslera.

Striker Lee Dong-gook, who was put into play for the second time in South Africa, also came close, but was intercepted by Muslera and the Uruguayan defense in the 86th minute.

Tabarez noted that the game was "very difficult" and that the Koreans surprised them in the latter part of the match.

"I think the team showcased their maturity and temperament," he said. "I think our team played a better game in the last minutes."

The South American team, champions of the first World Cup in 1930 and again in 1950, have not conceded a single goal against France, South Africa and Mexico in the group-stage matches.

Uruguay, 16th in world football rankings, has now recorded five consecutive wins against South Korea, including a victory from the group stage match in the 1990 Italy World Cup.

South Korean captain Park Ji-sung expressed his mixed feelings, saying, "There can only be regrets from a lost match. We could have won the game and the players also showed such potential."

The talismanic midfielder of Manchester United said he realized how "important defense is in becoming a strong team," but was satisfied in having reduced the gap in football level with world giants.

"It's regrettable that the defensive line has little experience playing overseas," Park said.
Striker Lee Dong-gook, who was put into play for the second time in South Africa, appeared empty after having missed a golden opportunity to
equalize the match near the end.

"After having waited for 12 years, (the World Cup journey) has ended in vain. This is not the result that I anticipated," said Lee.
After the final whistle blew, defender Cha Du-ri fell to the ground and burst into tears.

"I cried wondering if I would be able to return to such a large event," the 30 year-old said. "I believe we can produce much better results four years from now, but I think this match could be the last for me."
Back home, South Korean football fans expressed disappointment at their World Cup squad's narrow defeat, but offered words of encouragement to the "Taekuk Warriors."

Nearly a million Korean football fans, braving late-night drizzling rain, took to the streets Friday to cheer on the Korean athletes, only to have their dreams shattered. The Korean team had many shooting chances throughout the match, and the fans responded with anxious screams and applause.

The fans were visibly disappointed at their team's loss but eventually erupted into applause for the Korean footballers' first-ever advance into the World Cup knockout stage on foreign soil.

"We lost, but I'm proud of our team. I really wish they make it to the quarterfinals in the next World Cup," said Lee Chang-bok, 23, who watched the game in front of the Seoul City Hall.

Police estimated that 920,000 people took to the streets in Seoul and other major cities nationwide to watch the game.
South Korean President Lee Myung-bak, on a trip to Canada to attend a G-20 summit, also offered words of encouragement to the Korean players.

"Our team was defeated, but played well. I want to offer encouraging words to our players for doing their best until the last moment," the president was quoted by his spokesperson as saying after watching the match at a hotel in Toronto.