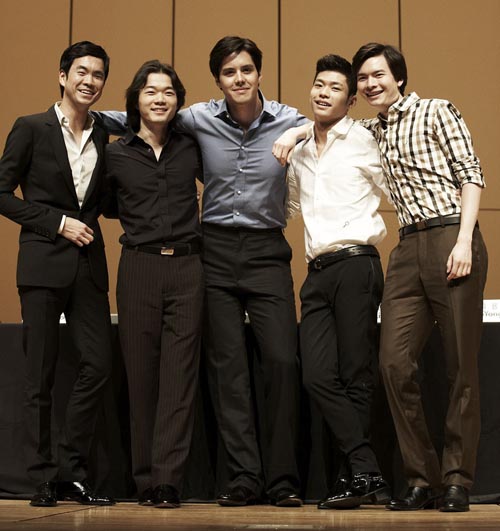 
Ditto, a chamber ensemble featuring some of the most talented - and some say attractive - young men in the international classical music scene, kicked off its annual season last Tuesday in Seoul. The concert season, which will be presented under the name Ditto Festival, stretches over 12 days and two venues - Hoam Art Hall in central Seoul and Seoul Arts Center in the southern part of the city.

Led by violist Richard Yongjae O’Neill, the all-male ensemble has become something of a sensation in Korea, igniting the classical music scene by increasing interest in classical music among the general public.

The group’s good looks have made it especially popular with young women, while the group’s talents are what keep conventional audiences engaged.

The ensemble has a rotating membership, but that hasn’t put a damper on their popularity. They are often referred to as “idols of classical music,” but O’Neill keeps the focus on the music.

“For me, the music is the centerpiece,” O’Neill said about the ensemble in a press conference last week.

While last year’s season concentrated on works by orthodox composers like Beethoven, Schumann and Tchaikovsky, the range of works in this year’s season will be more diverse, with music by more modern Eastern European artists such as Dvorak, Holst, Kodaly and Dohnanyi.

This year, the ensemble intends to “push the boundaries [of the repertoire] toward more unusual works,” said violinist Stefan Jackiw, an ensemble member.

These artists will be joined by former ensemble members and other solo musicians who themselves are all promising young male musicians. Included in this group are pianist Lim Dong-hyek, who had a recital with French cellist Gautier Capucon last Saturday; violinist Joshua Bell; Russian virtuoso trumpeter Sergei Nakariakov; and violinist Ryu Goto, the younger brother of one-time violin prodigy Midori.

When asked by reporters whether the ensemble has any plans to include female musicians in its lineup, O’Neill only said, “Maybe,” without elaborating further.

The concert series got started on Tuesday with a performance by Joshua Bell, one of the most beloved male violinists in the United States.

He appeared with the Academy of St. Martin in the Fields, a leading British chamber music orchestra.

Tomorrow, trumpeter Nakariakov will have his first solo recital in Seoul.

On Saturday, Ditto will appear with pianist Lim and a domestic orchestra that is part of the annual Tongyeong International Music Festival. Together, they will perform Holst’s best-known opus “The Planets” with a visual backdrop to enhance the music.

The next day, in its “Bohemian” program, the ensemble will present Zoltan Kodaly’s Duo for Violin and Cello, Op. 7; Erno Dohnanyi’s Serenade in C for Violin, Viola and Cello; and Dvorak’s Piano Quintet A major, Op. 5. The first two composers are Hungarian while the latter is Czech, nationalities, for the ensemble, representing the Bohemian spirit.