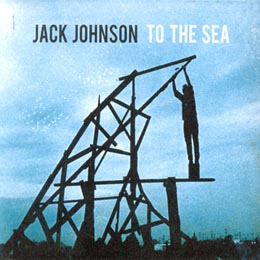 When Hawaiian Jack Johnson had to give up his career as a professional surfer after an injury in his teens, he found a new beginning in music. With “To the Sea,” his fifth studio album, Johnson has returned to his roots and shown us the romance of seaside living.

In an interview, Johnson said the album was about “trying to go beneath the surface and understand yourself.” But with its laid-back melodies and sweet guitar progressions, it lends itself more to a day at the beach than a soul-searching journey.

The title track “To the Sea” - the most serious track and a look at fatherhood - is lyrically interesting, but I much prefer his light, summery songs to such ruminations.

“From the Clouds” is a standout of this genre. With lyrics like “You’re so sweet to me / when you beat me in double solitaire,” the track is both catchy and clever.

Johnson has found a good balance between traditional rock ballads and upbeat pop songs in To the Sea. This album is a must for any summer barbecue.

Jack Johnson “To the Sea”