A STRATEGY BEGINS TO FORM
Blind sacrifice in a faceless war

Last week, General Paik acquired five new rocket launchers that finally enabled him and his troops to destroy 10 of the enemy’s Soviet-made tanks. 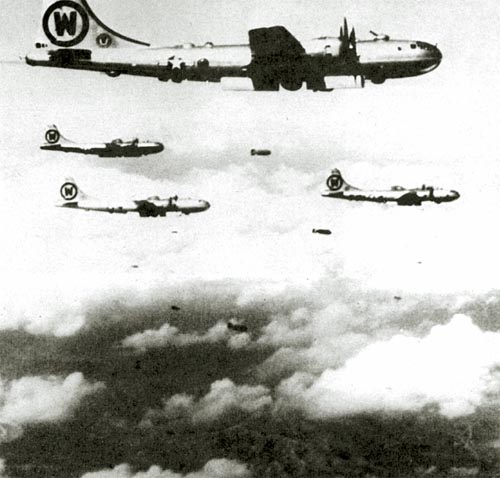 American B-29 Superfortress bomber aircraft fly during a carpet bombing mission of the North Korean troops west of the Nakdong line. Provided by the U.S. Army

Enemy forces showed no signs of slowing down as we got closer to National Liberation Day. In trying to follow Kim Il Sung’s orders, North Korean troops had set the initial goal of seizing Busan by Aug. 15, 1950. Although that goal was rendered impossible due to the valiant efforts of ROK and U.S. troops, the enemy had set a new goal of seizing Daegu by the same date and continued to forge ahead with their aggressive attacks.

The Battle of Dabudong, which was part of the overall effort to protect the Nakdong line, was marked by fierce, blood-soaked clashes. The severity of the battle has been made evident by current efforts to unearth remains in the areas surrounding Dabudong. The largest number of remains uncovered in Korea from the war are being discovered in the area. Aside from soldiers, it was where a lot of hired labor, recruited to transport ammunition and food to ROK and U.S. troops, were killed while attempting to protect a newly independent Korea.

As we approached Aug. 15, dread of another fierce battle around the Dabudong line increased. The ROK 1st Division’s 12th Regiment, which was in charge of defending the central area of the Waegwan to Pohang portion of the Nakdong line, was at a disadvantage from the start. The enemy troops had already gained a foothold in the Mount Yuhak and Mount Suam area before the 12th Regiment arrived.

The 12th Regiment had to fight an uphill battle. Despite suffering heavy casualties, the men of the 12th Regiment fought heroically and did not relent as they forged ahead toward the tops of the mountains while enemy troops shot at them from above. Our men resorted to throwing hand grenades at the enemy when they were close enough. When they ran out of hand grenades, they threw rocks.

The 11th Regiment, positioned to the right of the 12th Regiment, was also faced with a daunting task. The North Koreans were attempting to penetrate the 11th Regiment head on using tanks and heavy artillery. Using their newly-acquired M20 3.5-inch rocket launchers, or “Super Bazookas,” the 11th Regiment tried desperately to hold off the incoming troops but to no avail. They were pushed back a total of 3 kilometers (1.9 miles).

The fighting in the surrounding mountains was chaotic. Our men were entangled with enemy troops in close quarters fighting that made it difficult to differentiate between friend and enemy.

The already fierce fight reached a fever pitch on Aug. 15. The opposing sides were fighting at such close range that it made more sense to attack with hand grenades rather than use semiautomatic rifles. This was the case for the entire 21-kilometer stretch. The casualties began piling up and both sides started using the corpses as shields.

The areas connecting the ridge between Mount Yuhak and Mount Suam were littered with corpses, and the stench of rotting flesh filled the air. The 15th Regiment’s reconnaissance team, which headed a mission to locate the movements of the enemy, had to cross the Nakdong River. They set out on their mission on Aug.13 and decided to enter the Nakdong River at 11 p.m. As the soldiers would later explain, they immediately ran out of the river due to the putrid smell of decaying flesh arising from the water.

We were at such a critical and desperate juncture that we began to send in student soldiers as replacements without training them properly. We just didn’t have the time to teach them the basics. We had just three to four hours to show them how to shoot their rifles and throw hand grenades before sending them off to the battlefields. 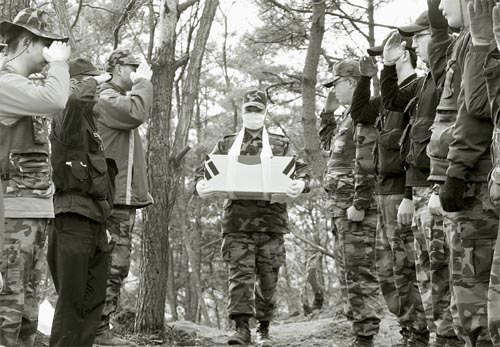 Countless numbers of young men sacrificed their lives for Korea during the war. Above, an excavation team holds a ceremony on March 9, upon unearthing the remains of a soldier who was listed as missing in action. [YONHAP]

Some of the soldiers were obviously not too pleased with the replacements since they were inexperienced and often failed to understand orders properly. Still, the student soldiers went into battle and sacrificed their lives without even learning how to defend themselves properly.

Meanwhile, the number of casualties continued to rise and replacement student soldiers continued to file in. It was normal to see losses of 30 to 40 percent of our troops after each battle. After a while, it became the norm to have platoon leaders enter battles without even knowing the faces of the men under his command.

Leading up to Aug. 15, we were facing heavy pressure along the Dabudong line, and I felt a desperate need to request reinforcements. I got in touch with our American allies.

I told a colonel with the U.S. 8th Army that we were facing a grave situation here and needed help. He listened intently before pondering the question for awhile and then said that he would alert headquarters about the situation.

He went to pick up the phone and explained that the ROK troops were facing a very tough situation. The U.S. 8th Army seemed to fully understand the seriousness of the situation. They agreed to send in reinforcements.

However, what followed next was not what we expected.

In the early hours of Aug. 16, we recaptured Hill 328. In the center of the Nakdong line, the 12th Regiment reached the ridge of Mount Yuhak. To the west, the 11th Regiment had defeated the enemy and was waiting for instructions on Cheonpyeong-dong Road.

Before noon on Aug. 16, the U.S. 8th Army ordered all of our men to dig deep foxholes and keep our heads covered. They were planning a carpet bombing mission.

Having received the good news, I gained the strength to address my men about the plan for a counterattack.

“I know we’re going through a tough stretch, but if we are suffering, our enemy must be hurting twice as much,” I stated. “We will soon have reinforcements and we will also receive air support.”

It was at around 11:58 a.m. when all the noise seemed to be drowned out by the buzzing of the U.S. Air Force’s B-29 Superfortress bomber aircraft. Soon afterward, we began to hear large explosions.

Having departed from Okinawa Air Base in Japan, 98 B-29 bombers flew in five formations. For 26 minutes, the B-29s bombed Yangmok, a rectangular area just west of the Nakdong River, and Gumi, measuring 5.6 kilometers wide and 12 kilometers long. The area was said to be populated with enemy troops preparing to attack Daegu. A total of 3,234 bombs weighing 900 tons were dropped in the area. It was the largest air bombing mission since World War II.

The bombing mission was successful in deterring the enemy troops, leaving the area in ruins. Years later, we heard from the locals that the area was damaged to the point that no vegetation grew for a decade after the bombing mission.

Those involved in North Korea’s first line of attack survived the bombing mission unscathed. This was because many had already crossed the Nakdong River and were involved in battles with ROK troops. However, North Korea’s supporting troops west of the Nakdong River were hit hard. More importantly, it was highly demoralizing for the North Korean troops. I later heard from a North Korean prisoner of war that the bombing mission was not only detrimental to their psyche but also destroyed their morale.

Due to the carpet bombing mission, North Korea lost most of their troops, artillery, ammunition and equipment, and they lost the ability to carry on fighting on a long-term basis. Nevertheless, the first line of determined North Korean troops continued to pour over the mountain ridges.