Ghana’s Asamoah Gyan, foreground center, celebrates after scoring the team’s second goal against U.S. goalkeeper Tim Howard, left, during the World Cup Round of 16 football match between the United States and Ghana at Royal Bafokeng Stadium in Rustenburg, South Africa on June 26. [AP/YONHAP]

The Black Stars booked a last-eight meeting with Uruguay on Friday at Johannesburg’s Soccer City stadium. The South Americans secured their progress with a 2-1 victory over Korea earlier on Saturday. Ghana become only the third African team to reach a World Cup quarterfinal, matching the achievements of Cameroon in 1990 and Senegal in 2002.

“I am the happiest man in the world,” said Gyan. “In 2006 we made the second round, now we have gone a step further. We have made Ghana proud and the whole of Africa proud.”

The Black Stars, who also defeated the Americans in 2006 at the group phase, are the last of six African teams that began the first World Cup on African soil.

“I thought at 1-1 we had a chance but we didn’t have enough freshness against all of Ghana’s power,” said U.S. coach Bob Bradley. “We have a great squad. We’re proud but also disappointed not to have gone further.”

Kevin-Prince Boateng gave the Africans the lead in the fifth minute but the Americans, who fought back to draw after falling behind against England on the same pitch two weeks ago, equalized in the 62nd minute via a Landon Donovan penalty.

African champion Ghana denied an attacking U.S. side the decisive goal late in normal time, setting the stage for two 15-minute extra-time periods. The wait for the game’s pivotal moment lasted only three minutes. Ghana’s Andre Ayew launched a high, bouncing pass upfield to Gyan, who tried to keep control as he was bumped into by U.S. captain Carlos Bocanegra - Gyan’s friend and teammate with French club Rennes. 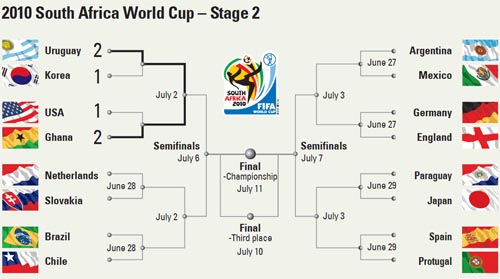 Gyan came away with the ball and met it on the bounce two strides later to blast a left-footed shot over goalkeeper Tim Howard for his third goal of the tournament, taking him to a share of the lead in the goal-scoring chart.

The Black Stars, whose only goals before the match had come from two Gyan penalty kicks, had to be wary of a U.S. side known for late-match dramatics.

“It’s incredible, we’ve created history. It’s the first time that Ghana has reached the quarterfinals,” beamed Ghana right-back John Pantsil. “We played for 120 minutes and everyone gave his best.”

The Americans had rallied to draw 1-1 with England, come from two goals down to draw 2-2 against Slovenia and edged Algeria 1-0 thanks to a Donovan goal in stoppage time that put the U.S. squad into the last 16 and into Ghana’s path.

Ghana goalkeeper Richard Kingson, the third-choice keeper for English side Wigan last season, had already been heroic in thwarting the Americans time and again in the second half and he anchored a Black Stars defense that denied them to the final whistle.

A U.S. corner just into extra-time injury time saw the Americans send their goalkeeper into attack to try and net the equalizer but the extra attacker was not enough for another Stars and Stripes miracle finish. The U.S. team failed in a bid to match their 2002 quarterfinal run and win back-to-back Cup matches for the first time in 80 years, while they have still not won a World Cup match in which they trailed.

Yellow cards issued to Ghana defender Jonathan Mensah and midfielder Ayew mean they will miss the match against Uruguay.