Who are we if we condone torture?

Who are we if we condone torture? 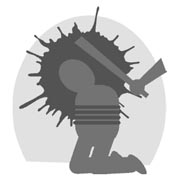 “If you are tortured / you realize that humans are not humane / not only the ones who torture / but also the tortured / all are in that second basement room deep in the night.” - From “Torture” by Ko Eun

In the old days - when slaves, women and people in the lower classes were regarded as less than human - torture was not uncommon.

The Roman Emperor Nero forced criminal suspects to drink a lot of wine and then tied their hands and feet with the string of a musical instrument. Whenever the suspects twisted and turned to contain their urine, the sharp string dug into their flesh.

The Spartan tyrant Nabis used the innocent citizens of Sparta as the subjects of his torturous ways. If they did not comply with his demands for money, he thrust at them a wooden effigy of a woman covered in sharp iron spikes that were concealed by her colorful clothes, saying that “his wife” Agepa will persuade the person to do what he wanted.

In the modern age, where basic rights are guaranteed, advocates of the ticking time bomb scenario would say there are occasions when torture is justified. The logic behind the scenario is that torture can be used if a criminal suspect has information on the location of a bomb that could kill many people if it explodes.

In November 1956, the provincial governor of Algiers, Paul Teitgen, faced such a situation. He had survived numerous forms of torture under the hands of the German army during World War II. One day, the local police chief asked him for permission to torture an independence movement activist to gain information about the location of explosives. The lives of several thousand people were at stake. But Teitgen refused, saying that if the police were allowed to start using torture, they would never know when to stop.

Others have also called for an end to the use of torture. Albert Camus, the author of “The Stranger,” once said that though torture has saved lives by revealing the locations of 30 bombs, it has also aroused 50 new terrorists who will cause the deaths of even more innocent people.

Last Wednesday, officers with the Yangcheon police station in Seoul were arrested on charges of torturing suspects and concealing evidence.

This makes me wonder whether the specter of Korea’s modern history of torture, like the torture death of Seoul National University student Park Jong-cheol by police in January 1987, has arisen once again.

Advocates of torture often say that it is necessary to torture suspects to get a confession.

However, I would like them to consider French writer Voltaire’s elegant rejection of that theory. He says that as long as the law does not declare the culprit guilty, it is not certain whether he has committed a crime, and that the torturer imposes a much more cruel punishment than the one the suspect will suffer if he is found guilty.