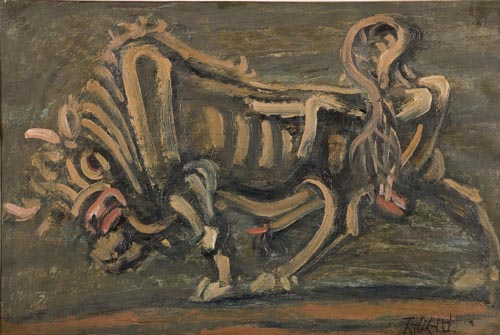 Lee Joong-seop’s “Bull,” which is expected to set a record at an auction slated for today. Provided by Seoul Auction

Interest in blue-chip works by famous Impressionist and Modern painters in European and U.S. art markets in recent days could influence Korea and help the nation set a new record for a piece by its own blue-chip artist, experts said.

The highlight of Christie’s London auction on Wednesday was Pablo Picasso’s “Portrait of Angel Fernandez de Soto” (1903). The work from the Spanish painter’s Blue Period depicts a young man with an absinthe glass. It was sold to an anonymous bidder for nearly 34.8 million pounds ($52 million), garnering the highest price of the night.

The painting was sold by the musical theater composer Andrew Lloyd Webber to raise funds for his charitable foundation. Lloyd Webber said in an interview with the AP that he was pleased with the price, “especially in such austere times.” He had bought the painting for $29.2 million at a New York auction in 1995.

Although the oil painting “Nympheas (Water Lilies)” (1906) by the French Impressionist Claude Monet, which had been expected to garner up to 40 million pounds, failed to sell, the auction was still considered a success.

The auction house sold 46 works of art, including Gustav Klimt’s “Portrait of Ria Munk III” and Vincent van Gogh’s landscape “Parc de l’hopital Saint-Paul,” for a total sale of 152.6 million pounds, setting a record for an art auction in London.

“Foreign art markets have already almost completely recovered [from the aftermath of the 2008 global financial crisis],” said Jun Lee, chief executive officer of Seoul Auction, Korea’s biggest auction house. He said that because global stock markets and other financial markets are still moving slowly, capital is flowing in to art markets, especially for works by Impressionist and Modern artists who have proven to be competitive.

“Among blue-chip artworks, those that are relatively rare or new to the art market are in the limelight,” Lee said. “Monet’s Water Lilies probably failed to sell because a similar work was put up for auction not long ago.” 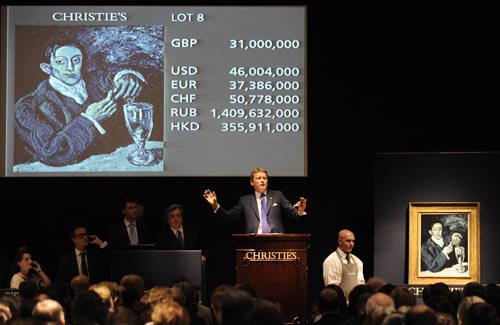 Christie’s auctioneer Jussi Pylkkanen speaks about Pablo Picasso’s “Portrait of Angel Fernandez de Soto” during an auction in London on Wednesday, where the piece sold for over 34 million pounds. [REUTERS]

This is a common trend at recent auctions in Europe and the United States. At a Christie’s auction in Paris in the middle of the month, bidding on Amedeo Modigliani’s stone sculpture “Tete” continued for nearly 15 minutes, according to the auction house. The piece fetched 43.2 million euros ($52.8 million), about 10 times higher than estimated.

That was a record for both the artist and an auction in Paris, Christie’s said. The previous record of 35.9 million euros was set by an oil painting by the French Fauvist painter Henri Matisse at the Yves Saint Laurent “sale of the century” in 2009.

Christie’s said that Modigliani left 27 sculptures, only 10 of which are currently under private ownership. That makes the piece, a 65 centimeter (26 inch) high sculpture of a woman’s head, a rare buy.

Last Tuesday, one of two self-portraits by the French Impressionist painter Edouard Manet sold for 22.4 million pounds at a London Sotheby’s auction, setting a record for a Manet piece. 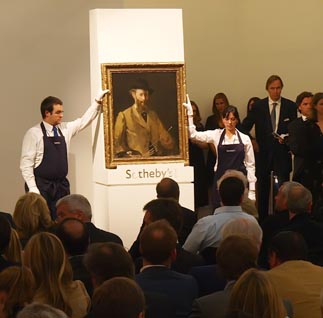 Both Kim and Seoul Auction’s Lee predict that Korea’s art market will follow a similar trend. In that respect, the painting “Bull” by Lee Joong-seop (1916-1956), which will be put up for auction at a quarterly sale organized by Seoul Auction this afternoon, is attracting great interest not only from connoisseurs but also the public.

Lee is one of the most revered Korean modern painters, along with Kim Whan-ki and Park Soo-keun, among others. And Lee’s paintings of bulls are regarded as his best works, experts say, because of their exquisite combination of European Fauvist influence and indigenous Korean colors.

The current record is 4.52 billion won for Park Soo-keun’s “Washing Place,” which sold in a May 2007 auction organized by Seoul Auction. The bidding for Bull will start between 3.5 billion and 4.5 billion won.

“We expect blue-chip works such as Lee’s Bull to set new records,” said Kyung Lee, executive director of Gana Art, one of the nation’s biggest galleries.

“However, even the record prices are billions of won, compared to tens of billions of won for works by European and U.S. masters in those markets, showing that Korea’s art market is still weak.”

“In addition, the speed of recovery is slow, compared to Western markets,” she continued. “The government’s plan to impose a capital gains tax on the art trade is one of the burdens to recovery.”