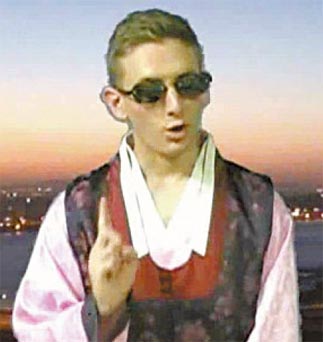 In this still from a music video he made about South Korea, Michael Aronson raps about the country’s attractions. With the video, he won first place in a contest organized by 10 Magazine last month. Provided by Michael Aronson

For some foreigners living in South Korea, the way the tourism industry has promoted the country over the years has not done justice to the place they now call home.

But a contest aimed at promoting South Korea and sponsored by 10 Magazine, a publication targeting expats here, recently gave foreigners a chance to change that by submitting their own videos promoting Korea.

The 10 winners of the magazine’s first Korea Awaits! Video Contest, announced earlier this month, were selected by readers and a panel of four judges from the tourism industry. There were 42 entries submitted.

The winning entry was created by Michael Aronson, 27, an American expat who has lived in Korea on and off for four years.

“For foreigners who have never been to [South] Korea, all they really know about Korea is North Korea,” Aronson said in an interview on Friday.

He said that belief has not changed much, especially in the face of the March 26 sinking of the Cheonan, which killed 46 South Korean sailors in what is believed to have been a torpedo attack by North Korea.

The North’s denial of its involvement and its recent threats of war might worry some, but Aronson said he believes the danger from the North is not as pressing as some might imagine. He said he understands the threat as something that people who live here care about, but that it is not something that worries them in their daily life.

“The first thing that I decided to mention in the song was North Korea,” Aronson said of his winning entry. “I wanted to reassure people that they can forget about it.”

In his award-winning video, Aronson introduces well-known places in Seoul and other cities with a rap song he wrote. The song lists popular places and the activities for which they are known, including the Han River for rowing, Hongdae for rocking, the Cheonggye Stream for walking and Mount Seorak for climbing.

There was one more place that he wanted to be sure to include: Geumchon for kicking. The reference is to “Kickin’ it in Geumchon,” a music video made by EV Boyz, a trio of expats living in the Gyeonggi area. The video created a buzz two years ago because it was the first music video by a foreigner living in Korea to attract widespread attention. Aronson said he wanted to pay homage to the group by referencing it in his video.

Aronson says one of the reasons why tourists skip Korea in favor of China, Japan or Southeast Asia is because the country lacks the kinds of landmarks that attract tourists to other countries.

However, he also said that those who stay here long enough come to appreciate the unique things the country has to offer.

“Everything is kind of connected,” he said.

To see Aronson’s video, and the other winning entries, go to www.10magazine.asia.