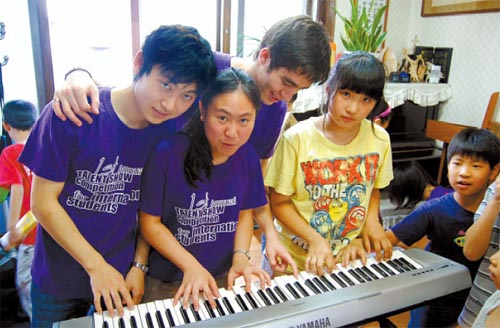 SISA students, Han Jin Lin, Xin Ying Ooi and Zohid Abdullaev, from left, play the digital piano they donated to the Saemmul Child Welfare Institution, as children from the facility listen on June 21. By Dilshod Gulamov


On the crowded third floor of the Saemmul Child Welfare Institution in Bongcheon-dong, Seoul, children were waiting impatiently in a line as nine foreign students in purple T-shirts from Seoul National University handed them presents during their visit to the facility on June 21. As soon as they received their gifts, the excited children ripped open the shiny wrapping paper to find packets of much needed stationery and other school supplies.

The gifts were donated by the SNU International Students Association, or SISA, which held a fund-raiser in May in conjunction with two other student groups. With the money they raised - 700,000 won ($594) - SISA purchased pens, notebooks and pencil cases, as well as a digital piano.

The Saemmul Child Welfare Institution, established 11 years ago, is a home for children whose parents have abandoned them after divorce and children with working parents in the low-income class. Of the 46 children cared for by the institution, which is located in the home of founder Min Oe-sun, 11 children live at the institution and 35 children go there after school and return home after dinner.

The institution’s services are free and the funding it receives from the district office goes only toward teachers’ salaries, which means the remainder of the facility’s expenses must either be raised from private sources or are paid for directly by Min.

“We wanted to donate our money to an institution that does not get enough outside funding,” said Luoyi Zou, a social welfare major who was responsible for looking for a place to donate the money. “I hope our donation makes people more aware of welfare centers that are facing difficult conditions and encourages them to contribute.”

Another reason the group chose Saemmul Child Welfare Institution is that it has the most children from multiracial families in Bongcheon-dong, where 13 children out of 46 are from mulitethnic families, said Zou.

On the day the SNU students visited, they shared their culture with the children. Xin Ying Ooi from Malaysia sang a song and Zou, from Jilin, China, performed a traditional dance from Tibet.

“I learned traditional ethnic dances of China when I was young, and it was very meaningful to show the children the traditional Tibetan dance and teach them about various ethnicities in China,” said Zou, who is also the vice president of SISA. “I hope the children will be more open-minded toward foreigners after this event.”

As soon as they had finished giving out the stationary, SISA members showed the digital piano to the children, who screamed with delight when they saw it.

“Every time I wanted to play the piano, I had to walk up three flights of stairs, but now there will be another piano on the first floor, so it’s going to be so convenient,” said a thrilled Yu Ji-hyeon, an 11-year-old girl who has studied the piano for about three months. “Sometimes we would get into fights because everyone was trying to play [the piano] at the same time, but we don’t have to do that anymore.”

“We only had one piano, so only five to six children could take lessons,” said Park Chae-hyeong, a social worker at Saemmul. “It was difficult to get funding from the local government for a new piano, even though we really needed one. I am very thankful to SISA for donating the digital piano. Many more children will be able to study and practice the piano from now on.”

SISA raised the funds through the International Food Festival, which was held from May 12 to May 13. The group co-hosted the event with SNU Buddy, a mentoring program for exchange students, and Pronesis, SNU’s official volunteer organization. Together, they invited chefs from nine countries such as Sweden, Uzbekistan and Kazakhstan who are currently living in Korea. The event was extremely successful with a net revenue of 7 million won, and the three co-hosts received 10 percent of the profits, all of which they decided to donate.

Zohid Abdullaev from Uzbekistan, the president of SISA, said they are planning to donate all the profits they earn from future International Food Festivals, which take place every semester.

Specific plans for the donations have not been determined yet, but he said he is very excited about the prospect of helping more people.

“We are very blessed to have the ability to give to others,” said Xin Ying Ooi, an economics major. “But sometimes, we are not content with what we have until we don’t have it. It’s not about money. It’s about giving and how sincere you are about giving.”