Service, please — but not too much

Service, please — but not too much 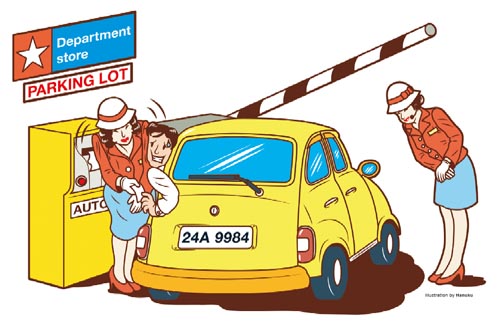 Enter any of the three major department stores in Seoul - Lotte, Shinsegae and Hyundai - in a car and you are greeted by an attractive twentysomething woman in a uniform and high heels who hands you a parking ticket from an automatic ticket dispenser right next to her. She then bows deeply at the waist and thanks you for visiting the store.

This common Korean practice, taken for granted by the majority of shoppers here, is part of the kind of customer-oriented service provided by the country’s major department stores. The service prioritizes kindness and is based on the idea that the virtue leads directly to increased customer loyalty and sales revenue.

The women issuing the tickets are “the first people you encounter as you enter the department store,” said a spokesman with Hyundai Department Store, which has its headquarters in Apgujeong-dong, southern Seoul.

Although Hyundai plans to adopt an automatic license plate recognition system at all of its stores - which would eliminate the need for tickets altogether - it will still have the women greet customers at the parking lot gate, he added.

Such efforts to provide better customer service have proven quite successful, and department stores are often identified with kind service in the minds of the general public. But not all customers are happy about the high level of customer service. In fact, some customers say they are overwhelmed by what they describe as an overly burdensome level of kindness.

“I appreciate department store workers trying to be kind to customers,” said Esther Park, a 33-year-old office worker who often shops at department stores for her outfits. “But sometimes I feel they are just going too far. Why does a third person have to pull out the parking ticket when I can reach the machine? I think it’s a total waste of human resources and money.”

Some academics say the current level of service at department stores, which some customers say is excessive, is reflective of Korean culture.

“There is this traditional culture remaining among a sizable portion of Koreans who enjoy being served,” said Yi You-jae, professor of business administration at Seoul National University. 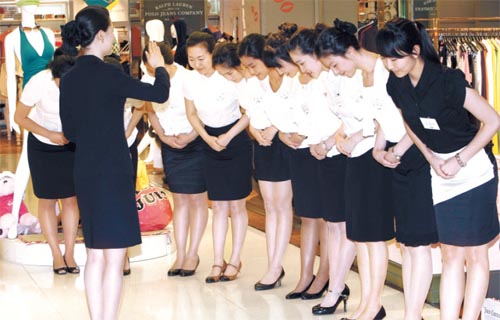 University students train to become sales clerks in a “kindness academy” at the main branch of Hyundai Department Store in Apgujeong-dong, southern Seoul. Students who participate in the program are given college credit. [YONHAP]

To cater to this demographic, local department stores have even developed manuals on how to deal with customers as well as on how to prevent potential complaints. The manual, for instance, stipulates that clerks should always greet and see off customers at the entrance of the shop and says they should apologize if they are busy and have to keep a customer waiting.

Some department stores such as Hyundai have undercover inspectors who monitor clerks to see how well they are following these guidelines. Shinsegae earlier this year launched a campaign called “smile marketing,” in which company executives make rounds to see if clerks are smiling enough. Workers who don’t smile while dealing with customers are given bad marks in their performance evaluations.

According to Professor Yi, because retailers sell many of the same products, service has become a major factor that helps them stand out amid the uphill battle to attract more customers.

Meanwhile, the Lee Myung-bak administration has placed fostering the service industry on top of its policy agenda for the latter half of this year. It believes the industry can become a driving force behind job creation, which is a major propeller of economic growth.

According to research from the Korea Development Institute, a state-run think tank, 1 percent growth in the manufacturing industry leads to a 0.1 percent decline in employment, while the same percentage of growth in the service industry contributes to a 0.66 percent increase in employment.

However, Korean retailers’ focus on customer satisfaction has had another serious side effect: spoiled customers. Some customers who oversubscribe to “the customer is the king” motto sometimes initiate arguments about things that are obviously their fault or treat store clerks poorly, at times even verbally and physically attacking them.

The problem is perpetuated as retailers justify these incidents by sticking to their “the customer is always right” rule and forcing employees to apologize first, regardless of their actual guilt. Various retailers in Korea keep a blacklist of customers with bad behavior, but the employee’s only course of action is to be more cautious and kind.

On the other hand, most department stores in Japan, another country with a reputation for its quality customer service, run on a three strike system, whereby any customer with poor behavior is banned from shopping there after three negative incidents.

“Many people assume that store clerks should be immensely stressed from having to deal with malicious customers. But in reality a major portion of their stress comes from the attitude of their employers, who often have little consideration for their workers’ feelings,” says Jung Min-jung, general director of the Korean Federation of Service Workers Union. 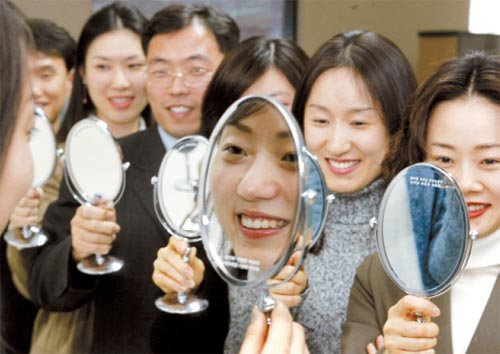 The Ministry of Patriots & Veterans Affairs distributed mirrors to civil servants to help them practice their smiles. By Choi Seung-shik

She presented the experience of one union member as an example. Kim, a clerk at a perfume shop within a department store in Seoul, had a customer who insisted on getting a refund for a bottle of perfume she had bought several months earlier. The customer claimed the bottle was broken at the point of purchase but Kim found that more than half of the perfume had already been used. When Kim refused to accept the demand, the customer caused a disturbance and summoned the shop manager. Kim was reprimanded in public by the manager and was forced to submit a letter of apology. Later she was again censured by department store managers.

When similar incidents take place in other advanced countries, employers tend to give employees the time and space to pull themselves together first, instead of taking punitive measures against them, Jung said.

“Employees should have the feeling they are at least protected by their employers,” she said.

Experts say employers should open their eyes to the importance of the “emotional labor” done by its workers. Arlie Hochschild, professor of sociology at the University of California, Berkeley, developed the term in early 1983 in her book “The Managed Heart: The Commercialization of Human Feeling.” She defines the phrase as a “management of feeling to create a publicly facial and bodily display” and a detachment from self to fulfill the requirements of a job, regardless of whether the work is compatible with one’s internal feelings. In the book she uses flight attendants as an example, since airlines also promote customer satisfaction.

The notion started garnering attention in Korea late last year as the Korean version of the book’s 20th anniversary edition was published by Imagine, a small local publisher specializing in humanities and social issues. “The concept of emotional labor has spread across Western countries over the past decades, while it is just beginning to gain recognition here,” said the publisher.

Kim Jong-jin, researcher at the Korea Labor & Society Institute, says management strategies for the service industry here fall behind those of other advanced economies.

“The recent effort to raise the quality of service in department stores, discount chains, hospitals, hotels and restaurants has certainly borne fruit,” he said. “But many companies still believe they can minimize labor costs while demanding a maximized level of service from their employees. Employers and customers should treat service workers as equal human beings.”

Because it is difficult for employees to demand improvements in the workplace, he recommended that consumers could be the first to request the change.

A good example of customer-led reform is the service policy implemented at family restaurant chains such as Bennigan’s and TGIF in Korea in the 1990s. Under the policy, servers were instructed to kneel down when taking customer orders in order to maintain eye-contact, but increasingly negative feedback from customers, who felt it put the server in a humiliating position, led to the policy’s demise two years ago.

Professor Yi of Seoul National University says some service providers are starting to consider their workers as “internal customers.” For example, Shinhan Bank, the nation’s second-largest lender, launched an employee satisfaction center in late 2008. There, its employees, and tellers in particular, can receive stress management and mental therapy. Many employees have actively taken advantage of the service, a bank spokesman said. “We believe that only when our workers are satisfied with the workplace can they provide satisfactory service to customers,” he said.

Creating a quality workplace environment for people in the service industry will be a win-win strategy for both the companies and the employees in the long term, Kim says. Humane treatment of workers will foster their devotion to the company, thus extending the period of their skilled service and eventually boosting profits.