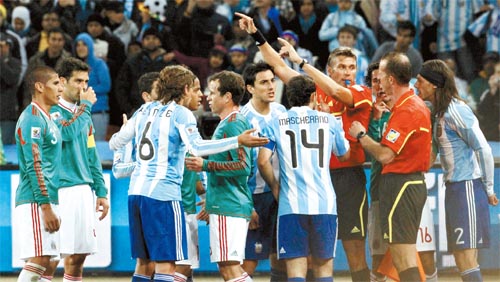 Referee Roberto Rosetti of Italy gestures as Mexico players appeal for an offsides call during the 2010 World Cup second round football match against Argentina at Soccer City Stadium in Johannesburg on June 27. [REUTERS/YONHAP]

Germany thrashed England 4-1 to leave Fabio Capello pondering his future as national coach while Diego Maradona’s Argentina saw off Mexico 3-1 as the former champions paved the way for a quarterfinal showdown in Cape Town on July 3.

Both Round of 16 games, however, were mired in controversy.

Capello slammed the Uruguayan referee as his team crashed out in humiliation. Frank Lampard had a legitimate goal disallowed by referee Jorge Larrionda when England were trailing 2-1 just before halftime. With England surging forward, the midfielder unleashed a drive that beat goalkeeper Manuel Neuer, came off the underside of the crossbar and landed over the goal-line before bouncing out.

Amazingly, Larrionda waved play on and Thomas Mueller scored twice within four minutes midway through the second half to finish the job. “The referee made one of the biggest mistakes,” said Capello.

But he could not disguise his admiration for a young German team that cemented a convincing win. “Germany are a great team. We were caught out on the counterattack,” Capello said.

Miroslav Klose and Lukas Podolski had given Germany a 2-0 lead as England’s defense was repeatedly carved open before Matthew Upson won an aerial duel to nudge his side back into contention.

“I said to my team at halftime, ‘we need to try to score the third goal,’” Germany coach Joachim Loew said. “We knew we could hit England on the counterattack because they were open. Our players carried it off brilliantly.” Lampard insists the time is right for football to fall in line with other sports by adopting technology.

“I am in favor of goal-line technology, especially after tonight,” said the Chelsea midfielder. “The ball crossed the line, it was over, it was so obvious. If we had got back to 2-2 at that moment, it could have been different.” 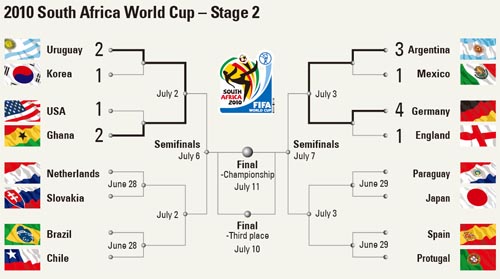 The previous widest margin between the countries was 4-2 for England after extra time in the 1966 World Cup final that also had a controversial moment with a Geoff Hurst goal allowed amid claims the ball did not cross the line.

In Johannesburg, two goals by Manchester City’s Carlos Tevez and Real Madrid’s Gonzalo Higuain, his fourth to become the tournament’s top-scorer, allowed Argentina to cruise through.

Mexico forward Javier Hernandez gave his side brief hope when he turned his marker in the 71st minute and smashed his shot past Argentina goalkeeper Sergio Romero.

Tevez’s first-half strike was awarded in controversial circumstances as replays showed he was offside when world footballer of the year Lionel Messi gave him the final pass. The Mexican defense complained bitterly, but Italian referee Roberto Rosetti allowed the 26th-minute goal to stand despite the furor caused by a replay of the incident on Soccer City’s giant TV screens.

Maradona said he was relishing the chance to once again lock horns with Germany.

“I feel like pulling on the jersey and playing myself,” he said.

“In the first few minutes we were superior. But then we conceded a goal which was offside and then there was an error in the defense. Two mistakes made a dramatic difference,” said Aguirre.

On Monday, the second round continues in Durban with the Netherlands facing Slovakia, whose victory condemned defending champions Italy to an early exit. In Johannesburg, five-time champions Brazil face Chile.