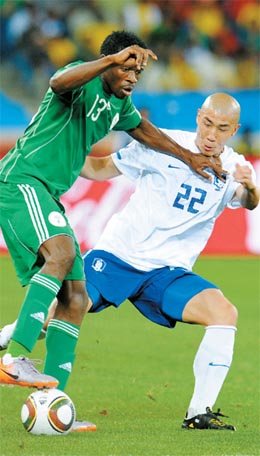 Cha Du-ri defends against Atanda Ayila Yussuf of Nigeria during the third and final Group B match on June 22. Cha started three of Korea’s four matches in the 2010 World Cup. [NEWSIS]

The 30-year-old right fullback has reached a two-year deal with the Scottish club and flew to Glasgow yesterday for his medical test.

Cha had not exercised an option to extend his contract with SC Freiburg of the German Bundesliga and had reportedly been courted by Celtic FC as well as American, German and Greek teams during the World Cup.

“Once my contract is finalized, I will take a two-week break in Korea,” Cha was quoted as saying in the German football magazine Kicker.

Cha had been planning on returning to Korea with his teammates but got a last-minute call from his agent, who had been negotiating a contract with Celtic FC in Glasgow.

While the national football team left Johannesburg, South Africa, for Korea on the night of June 28, Cha stayed behind and spent an additional day in the city with his father, Cha Bum-kun, who is currently in South Africa as a football analyst for SBS.

Cha - a native of Frankfurt, Germany - has played his entire professional career in the German Bundesliga up to now.

Since the Korea University graduate signed with Bayer 04 Leverkusen after the 2002 World Cup, he has gone on to play for Arminia Bielefeld, Eintracht Frankfurt, Mainz, Koblenz and Freiburg over eight seasons.

In joining Celtic FC, the versatile forward-turned-fullback will get an opportunity to play for a traditional Scottish powerhouse.

The Celtic FC squad is consistently one of the top teams in the Scottish Premier League and boasts 42 League Championships, 34 Scottish Cups, 14 Scottish League Cups and one UEFA Champions League title.

Central defender Cho Yong-hyung of Jeju United, who was often regarded as the best Korean defender in the World Cup, is expected to make the jump to an English Premiership club in mid-July. Aston Villa, Sunderland and Tottenham are reportedly courting the 27-year-old defender.

After the national team’s recent defeat in the Round of 16, most players are now back in Korea and are considering their next moves.

Team captain Park Ji-sung will be busy working on final preparations leading up to the July 24 opening of the Park Ji-sung Football Center in Suwon, Gyeonggi. Park’s Manchester United teammate and French national team captain Patrice Evra is expected to join the opening day ceremonies. Park will likely then rest for a few days in Korea before returning to Manchester to prepare for the upcoming season.

Lee Chung-yong reportedly received interest from other English Premiership clubs but is planning on restructuring and signing a one-year deal with Bolton.

Lee Young-pyo of Al-Hilal has been asked by his team to return to the club sometime next week, while Dalian Shide’s new Korean manager. Park Sung-hwa, has called on Ahn Jung-hwan to return by July 18. All players affiliated with the K-League will take a brief break before joining their respective teams when the season starts on July 10.

In other transfer news, North Korea’s Cha Jong-hyok, 24, moved from the Amrokgang to the second-tier Switzerland club FC Wil. Cha is known as a fullback capable of making offensive surges and will join Kim Kuk-jin, who joined the club last year.