An exhibit best appreciated sitting down

An exhibit best appreciated sitting down 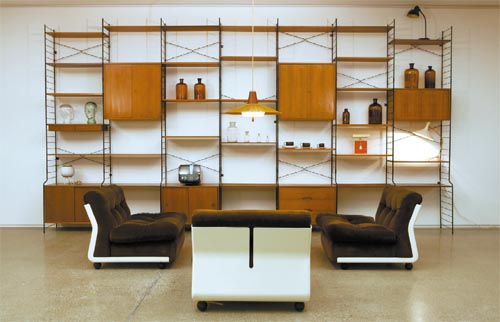 The furniture on display at PKM Trinity Gallery is arranged in spaces that look like living rooms to highlight the Bauhaus style. The pieces are part of the collection held by Sabo, a Korean illustrator. Provided by Sabo and PKM Trinity Gallery


They may not know it, but even people who are unfamiliar with the history of modern design and the Bauhaus are in fact living amidst pieces of furniture heavily influenced by the German art school. The exhibition “Bauhaus & Modern Classic - Sabo Collection” makes this clear through displays of chairs, tables, cupboards and other pieces of furniture whose familiar designs are infused with elements of the Bauhaus style.

The furniture in the exhibition - which continues until July 20 at PKM Trinity Gallery in Cheongdam-dong, southern Seoul - ranges from chairs designed in the 1920s by Marcel Breuer (1902-1981), the famous Hungarian-born architect who studied and taught at the Bauhaus, to works by anonymous designers from the 1970s who inherited the Bauhaus philosophy. The German art school operated from 1919 to 1933 and its impact on art and architecture continues to this day.

All 120 pieces on display in the exhibition are from the private collection of Sabo, a Korean illustrator and painter who works both here and in Germany. He told reporters last week that he became fascinated with Bauhaus-style furniture while he was studying in Germany more than 20 years ago and that he has been collecting pieces in this style for two decades.

“The Bauhaus school’s philosophy was based on creating art to be enjoyed by ordinary people in their daily life through a combination of art, crafts and technology to improve people’s quality of life,” said Sabo, whose real name is Im Sang-bong. “That philosophy gave birth to furniture designed in the Bauhaus style, which is noted for its refined simplicity, beauty based on ergonomics and practical convenience.”

Sabo said he began his collection with pieces of furniture he picked up on the street when he was a young student in Germany. Then he began working a number of part-time jobs in order to finance his desire for vintage Bauhaus furniture.

“This exhibition is different from previous furniture design shows in Korea, because the exhibit consists of pieces collected by the person who actually used them,” said Park Kyung-mi, director of PKM Trinity Gallery.

“To effectively show the collector’s affection for the furniture, which was part of his daily life, we have arranged the exhibits so that they look like the furniture in somebody’s actual living room, instead of like exhibits in a gallery,” she added. 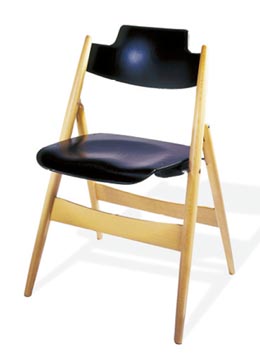 Egon Eiermann’s Model SE18 chair from 1952, which can be folded, is one piece in the exhibit.

For example, Breuer’s Model B32 chairs, supported by an elegant tubular steel cantilever, are not exhibited on a pedestal but are casually placed in a corner of the exhibition hall, which also has an audio system that was designed in the 1960s by the Italian Achille Castiglioni, as well as furniture by other well-known industrial designers.

Visitors are allowed to touch the pieces in the exhibit and can sit on the chairs, including those by Charles and Ray Eames and Egon Eiermann.

“I think that a chair has to be sat on to be well preserved,” Sabo said. “The tradition of the Bauhaus style faded in the 1980s with the emergence of cheap furniture without durability.

“People in this day and age can see the Bauhaus style in the furniture of Sweden’s IKEA and Japan’s Muji,” he said. “I actually have mixed feelings about these brands. I hate them because their designs are just copies of existing Bauhaus designs without any originality of their own. Nevertheless, they are teaching people about what the Bauhaus was - simple and practical examples of modern industrial beauty.”

*The exhibition runs until July 20. The gallery is open from 10:30 a.m. to 6 p.m. and is closed on Sundays. The gallery is in the Trinity Place building across the street from the Galleria Department Store’s East building in Cheongdam-dong. For more information, visit www.pkmgallery.com or call (02) 515-9496.