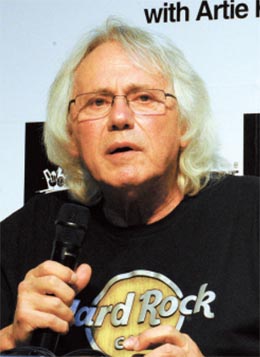 Around this time of year, music lovers start clamoring for seats to their favorite summer rock festivals. This year, however, it’s the festivals that are gritting their teeth in a fight to attract rockers to their events.

Increased competition from a host of newly-established events it the main factor affecting ticket sales at local festivals, however festival organizers say they are also having difficulty finding enough A-list artists for their lineups.

One of the biggest new festivals to arrive on the scene is Woodstock. Under the direction of Artie Kornfeld, the co-creator of the original event, Woodstock will have its first season in Korea Aug. 6-8. The lineup for the festival, which is billed as “The Spirit of Woodstock Festival, DMZ Korea,” includes legendary rock band Santana and popular pop punk band Simple Plan.

Meanwhile, the rock and electronica festival Summer Week&T 2010, also a new to the summer festival scene, will have a lineup that includes top pop stars such as Kanye West and Calvin Harris. The festival will take place Aug. 6 to 7.

“We do think that there seems to be more festivals this year compared to the current demand for tickets and we are anticipating a cutthroat competition before the Korean market grows again,” says Yoon Han-na, a representative of the Incheon Pentaport Rock Festival. “But we’re also seeing the positive side, which is that more people will participate in this culture since there are more choices available.”

The increase in the number of domestic events is not the only predicament the organizers face. The number of summer music events has grown worldwide, which translates to tighter competition for top acts.

“Although the United States and European countries have their festivals in different periods, the ones in Australia and Japan overlap somewhat,” Yoon said. “It was difficult for us to get the lineup that we have now.”

The ETP Fest, a local festival organized by the Seo Taiji Company, anticipated the increased demand for artists and decided earlier this year to cancel the event. The company said in a press released that it “would not be able to match the quality of the performances held last year.”

The Pentaport festival stepped up competition in the local arena earlier this month by discounting ticket prices by 33 percent and offering a new discount policy. Under the policy, people who purchased tickets before June 22 can turn in their tickets and buy new ones at the discounted price.

“We’ve had positive feedback from the new policy, especially from people in their teens to twenties,” says Lee Jin-young, a Pentaport representative.

Concertgoers seem to have welcomed the policy. “It’s great that they have lowered the price burden,” said Kim Beom-keun, 22, a student at Hankuk University of Foreign Studies and a frequent visitor to the summer rock festivals. “It will not only be good for us but will be good for the event itself because of the publicity that the festivals will get. I have a lot of friends who have decided to go because of it.”

Pentaport, which has a 10-year history, was one of the only major summer festivals until the Jisan Valley Rock Festival debuted last year. Last year, the two festivals were held on the same weekend, so this year Pentaport changed its traditional starting date from the last week of July to the third week of that month to avoid overlapping with Jisan.

Although it is likely that the rivalry between the two will subside, especially with the withdrawal of the ETP Fest and the addition of Woodstock, Pentaport says it is still keeping a positive outlook on the situation.

“We’ve had challenges ever since Pentaport first opened in 1999 and we think it’s our duty to keep the spirit alive especially for the fans,” says Yoon. “We didn’t start this by thinking that we were going to make a lot of money, but with the determination that we wanted to provide good live music to audiences. Moreover, it’s important that local festivals survive, no matter what the situation is.”