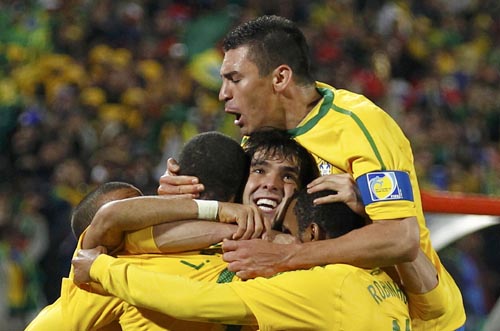 Brazil’s Luis Fabiano, jumping center, celebrates his goal with teammates during a 2010 World Cup Round of 16 soccer match against Chile in Johannesburg on Monday. [REUTERS/YONHAP]


JOHANNESBURG - The Brazilian football team set up a World Cup quarterfinal clash against the Netherlands with a convincing 3-0 win over Chile on Monday at Ellis Park.

First-half goals by center-back Juan and striker Luis Fabiano gave Brazil a 2-0 lead before Robinho locked in a quarterfinal berth for the team with the third goal after an hour.

“We have to improve in all sectors of our play, but it was a nice game against Chile,” said Brazil coach Dunga. “We have already said we are trying to play the kind of open football that everyone wants to see. The players did well and we got forward a lot.

“We know the Netherlands is a very difficult team to beat and is very able technically. The team plays football like South Americans.” 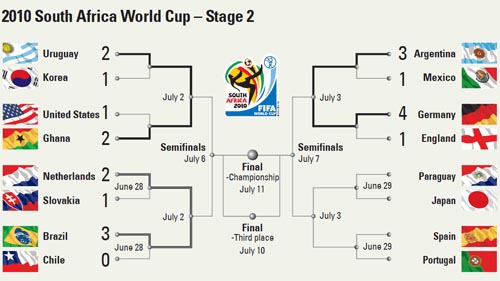 Brazil will face the Netherlands, a team that earlier downed Slovakia 2-1 in Port Elizabeth on Friday. The victory represented Brazil’s 47th win in 66 matches against Chile, which has only seven wins. “We made it to the last 16, and the elimination of the team is justified,” said Chile coach Marcelo Bielsa. “Perhaps we could have lost by less, but the superiority of Brazil was too much for us. We were unable to slow them down. As to my continuity in the job as coach, this is not the right time to talk about that.”

Chile goalkeeper Claudio Bravo said his side gave it a good shot.

“We have been beaten by one of the best teams in the world. We gave everything but we came up against a team that was very solid and played good football,” Bravo said. “We are good going forward but we have a fair bit of progress to make when it comes to defending.”

Chile made a bright start, but Brazil quickly got into its stride as Luis Fabiano and Gilberto Silva both forced Bravo into early saves. Brazil gave a loud appeal for a penalty at 27 minutes when defender Pablo Contreras took away Lucio’s legs, but referee Howard Webb waved play on.

Real Madrid’s Kaka, back in the side after serving a one-match ban for his red card against the Ivory Coast, picked up the first yellow card when he went for the ball, but caught Chile’s Arturo Vital on the ankle at 30 minutes.

Brazil took the lead at 34 minutes when Maicon swung in a corner and Roma defender Juan rose the highest to head past Bravo. Luis Fabiano made it 2-0 four minutes later after Kaka took a pass from Robinho on the left wing and slid the ball through for the Sevilla star to draw Bravo and slot home.

Chile’s Vital repaid the foul on Kaka and earned a yellow card at 47 minutes. Brazil then grabbed its third goal after Benfica’s Ramires ran from the halfway line to the edge of the penalty area where he laid the ball off for Robinho to fire home at 59 minutes. Chile refused to give up and substitute Jorge Valdivia fired over the crossbar at 67 minutes before teammate Ismael Fuentes was booked for a foul on Fabiano moments later.

Ramires will miss the quarterfinal with the Dutch after earning his second yellow card of the tournament for a foul on Alexis Sanchez at 71 minutes.

Suazo forced Brazilian goalkeeper Julio Cesar into a rare save at 75 minutes, just before Robinho had a second goal ruled out for offsides.

With 10 minutes left, Chile substitute Rodrigo Millar picked up a yellow card and Kaka earned a vuvuzela-fueled round of appreciation from Brazil’s fans when he went off.