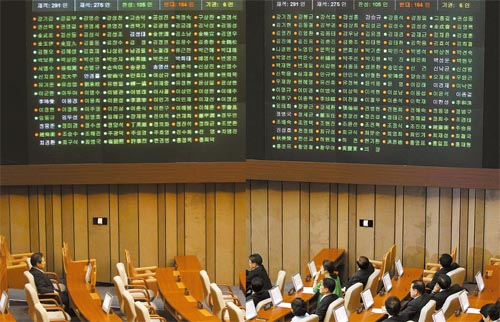 An electronic panel above lawmakers at the National Assembly lists the name of solons who attended yesterday’s parliamentary vote on the Sejong City revision bill and whether they voted for or against the bill or abstained. The controversial revision bill aimed at scrapping the planned relocation of key government offices out of Seoul was rejected by a vote of 164 to 105 with six abstentions. A total of 275 of the 291 incumbent lawmakers participated in the vote. [YONHAP]


The National Assembly yesterday killed President Lee Myung-bak’s plan to turn Sejong City into an industrial, science and education hub, and it will now become a new administrative region for government offices, as envisioned by his predecessor, Roh Moo-hyun.

The bills were killed by a vote of 164 to 105, with 6 abstentions. Under Korean law, at least half of the 299 assembly members must be present for a plenary session, and more than half of the members attending must give their approval for a bill to become law.

“The rejection of the revision bill means the controversy surrounding the Sejong City project has finally come to an end,” Democratic Party spokesman Noh Young-min said. “This is a victory for the people considering the sentiment expressed by the public [toward the Lee government] in the June 2 local elections.” 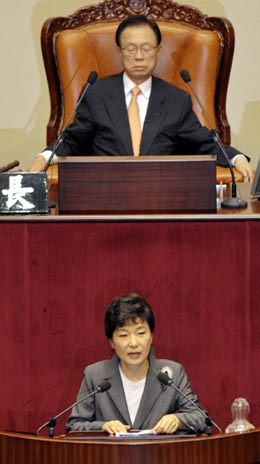 Political observers are now speculating about the fate of Prime Minister Chung, a key proponent of the revision bills.

Lee, who is in Panama to participate in the Central American Integration System conference, said he respected the assembly’s decision.

“I just heard the news that the revision bill was turned down at the parliament,” President Lee was quoted as saying by spokeswoman Kim Eun-hye. “As the head of state who’s in charge of state affairs I feel deeply regretful about it, but I respect the assembly’s decision. Let’s leave the evaluation of the assembly’s vote to history and I hope from now on we will go beyond conflicts surrounding Sejong City and move together to advance the nation.”

The revision bills were rejected by the National Assembly’s Committee on Land, Transport and Maritime Affairs on June 16, but they were put to a vote by the entire Assembly yesterday after 66 GNP lawmakers loyal to Lee requested it. The outcome was no surprise because opposition lawmakers and Grand Nationals loyal to Lee’s political rival Park Geun-hye opposed the revision bill.

“The government said universities and businesses would invest in Sejong only when the revision bills were passed, but they will come to us, too, under the original plan,” said Kim Ji-cheol, a dump truck driver at the Sejong City construction site.

Lee Si-jong, North Chungcheong governor-elect, said it’s important for the national and local governments to work together to quickly implement the original plan to move nine ministries and four government agencies from Seoul to Chungcheong, given that the “Sejong plan was set back by two years.”

“There should be compensation for residents who suffered a loss because of the delay of the original plan,” said Yu Han-sik, head of Yeongi County Office in South Chungcheong.

But some Chungcheong residents expressed skepticism about the original plan instead of Lee’s revision. “Farmers here gave their land to the government, but wouldn’t it be easier for residents to find jobs if corporations come down to Sejong rather than government offices?” asked Kim Yeon-yong, a 62-year-old in Yeongi County.

The Sejong revision was one of Lee’s signature projects.