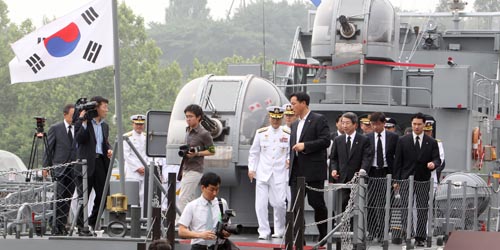 Prime Minister Chung Un-chan, third from right in front row, visits a life-size replica of the Chamsuri-357, the South Korean Navy vessel that went down in 2002 during a bloody battle between the two Koreas, on the eighth anniversary of the battle. It was the first time the anniversary was celebrated at the War Memorial in Seoul. [NEWSIS]