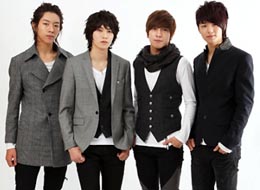 C.N. Blue, a four-member idol band, sold out for their July 31 concert, their first solo performance, in just one minute.

The single “Love” from the group’s second mini album “Blue Love,” released last month, was No. 1 on June 10’s “M Countdown,” a music program on MNet. It was also No. 1 on SBS’s “Popular Song” countdown show that aired June 20.

The concert will be held at the 2,000-seat AX-Korea concert hall in Gwangjang-dong.