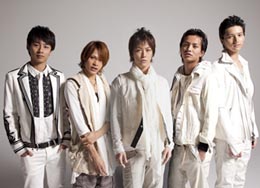 Japanese idol band KAT-TUN will be making their first appearance in Korea on MNet’s “M Countdown” on July 1.

“This is a band that brought over 680,000 fans to their concert in Japan last year,” MNet Media, the group’s representative in Korea said.

“The show will provide the perfect chance for Korean fans to see one of Japan’s representative bands in action.”

The band will have its first concert in Korea on Aug. 6 and 7. The show sold out in just 20 minutes after tickets went on sale on June 23.