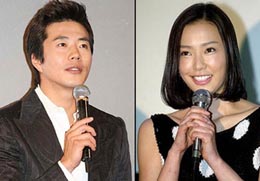 Actress Son Tae-young shut her Cyworld page due to the fallout form her husband’s involvement in a car accident earlier this month.

According to news reports, Son’s husband, actor Kwon Sang-woo, was driving on the wrong side of the road on June 12 and hit a parked car. He then ran into the police car that had pursued him, continued driving and hit a tree before fleeing the scene on foot. Two days later, he turned himself in at Gangnam Police Station.

Kwon, who stars in the Korean war film “71: Into the Fire,” apologized to the public once the accident had been made public, but netizens continued to express their anger toward him on Son’s Cyworld page.

The personal attacks on the couple were renewed later in the month when Son appeared at a fashion show after the news of her husband’s accident was made public.