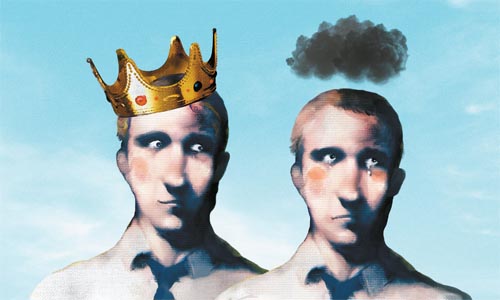 Outside of the context of his films, Yang Ik-joon once said he wasn’t interested in complex, worldly things such as the government’s cultural policy. Even after the carefree 35-year-old director received more than 20 awards globally for his first independent film, “Breathless,” last year, he remained indifferent to public issues. But then last year the Korean Film Council, or Kofic, named a new conservative leadership at Indie Space and the Media Center, and Yang experienced a political awakening.

“I know nothing about politics, but this government educated me,” Yang added wryly.

For two years, Indie Space and the Media Center had been managed by the Association of Korean Independent Film and Video. The former is a dedicated theater for independent filmmakers like Yang where they can screen their work cheaply, while the latter facility, better known as Mediact, is a public cultural center where individuals can learn filmmaking techniques and borrow equipment. It’s helped nurture many of Korea’s now successful directors, who say they used to frequent the center.

But on Nov. 20 last year, the association had the facilities snatched away from them, and the film council announced it would adopt an “open audition system” to determine the new operators.

After several rounds of evaluations, the council picked the Korean Association of Diversity Film to manage the Indie Space and the Citizen Visual Art Culture Organization for Mediact.

Yang had never heard of either of the groups, which wasn’t surprising. The KADF had been founded Nov. 13, just before the announcement of the “audition” system, and the CVACO was established on Jan. 6, 2010 - six days before the film council reopened the bidding for Mediact after failing to choose an operator during the first round.

Both Choi Gong-jae, chief director of the KADF, and Jang Won-jae, head of the CVACO, are members of the New Right, one of Korea’s biggest right-wing pro-government political groups. With 170,000 members across the country, the New Right is affiliated with organizations in Vietnam, Australia, Japan and the United States. Kofic Chairperson Cho Hee-mun is also actively involved in the movement. 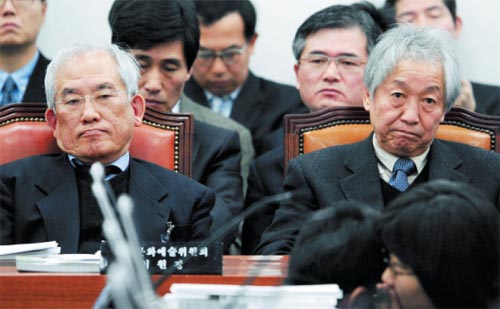 “It’s true. The KADF received the third-highest scores in the first round,” Ju Seong-chung, an official at Kofic, said.

In response, on Feb. 18, Yang and 154 other independent directors held a press conference in central Seoul, announcing they would boycott Indie Space and show their films elsewhere.

“We are not talking about political ideologies or beliefs,” said director Lee Chung-ryoul at the February press conference. “I just came here because I don’t understand this situation.”

Lee’s documentary “Old Partner” was a breakout hit, attracting 3 million viewers last year, and he has become an influential figure in Korea’s indie film scene. “I don’t even know who they [the new heads] are. I have significant doubts about how these people will manage the facilities,” Lee added.

The boycott continues to this day. According to Lee Ji-yeon, secretary general of the Association of Korean Independent Film and Video - the former operator of the two facilities - directors “try to find other ways to screen their films, but the number of newly released indie and documentary films have decreased significantly anyway” due to the boycott.

Lee added with a sigh, “Whenever a new administration takes office, many things change. Good plans or projects can suddenly appear or disappear in a day. If the government wants to see the film industry take root, consistent plans are desperately needed.”

It’s not the only recent controversy to hit the Korea Film Council, which manages a budget of 40 billion won ($36 million) per year to fund local filmmakers and promote their work overseas. When Lee Chang-dong submitted the screenplay for his film “Poetry” to Kofic to request funding last year, the council gave his application a score of zero points. Lee managed to secure cash elsewhere, and when Poetry screened at the Cannes Film Festival, it won the prize for best screenplay.

Instead of Lee, who, as of this year, has been invited to Cannes three times, Kofic chose the director Kim Ho-sun, who hasn’t made a film since his “Henequen” in 1997, to receive funding.

Of course, there’s no accounting for taste, but critics point to Lee’s unusually dismal score and accuse Kofic of discriminating against him for his political past - the director served as culture minister under the liberal Roh Moo-hyun administration, while Kofic Chairman Cho is an appointee of the conservative incumbent Lee Myung-bak.

It’s a symptom of a wider affliction that’s wreaked havoc on Korean cultural policy for decades. In another recent example, the state-run Arts Council Korea, abbreviated Arko, had two chairmen in February. The Culture Ministry under President Lee fired Kim Jung-heun, a Roh appointee, in December 2008 for allegedly mismanaging funds. They replaced him with Oh Kwang-su. But Kim sued the ministry for wrongful termination and won the court battle in December last year, returning to his office in February to serve out the rest of his term, which ends in September. 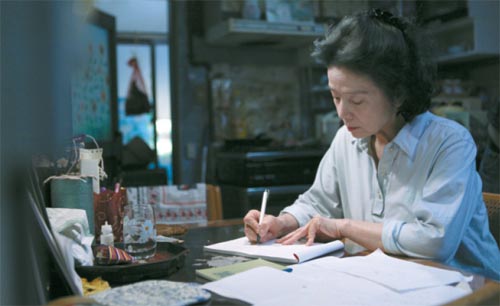 A scene from “Poetry” Provided by Fine House Film

The two chairmen were housed in two different offices, and Arko was paralyzed for more than a month, with employees confused about whom to report to. In March, the Seoul High Court reversed the ruling, finding for the Culture Ministry in an appeal. The court’s official stance was that overturning Kim’s termination would cause chaos at Arko.

During that bizarre month, when Kim was often photographed heading to the Arts Council every morning, some conservative politicians said Kim and other liberal bureaucrats “just don’t know when to leave.”

Yang Yoon, a psychology professor at Ewha Womans University, said they may be right. “There are two types of groups: an ingroup and an outgroup. Wanting to work with the ingroup, with one’s comrades, is one of the basic human instincts.”

But a fundamental difference might be to blame for liberals’ reluctance to give up the reins.

“Conservatives held power for more than three decades in Korea. They have ample experience in politics, so they know they will have their turn next time,” Yang said.

“But liberals have a relatively short history in politics compared to their counterparts. That’s why whenever liberals come to power, they want compensation for their time out, which makes them reluctant to give up their posts.”

Of course, conservatives still complained when the Roh administration, in office from 2003 to 2008, appointed Lee as culture minister from February 2003 to June 2004. They also criticized the appointments of poet Hwang Ji-woo as president of the Korea National University of Arts in March 2006 and of progressive novelist Hyun Ki-yong as chairman of the Korean Culture and Arts Foundation, the old name of Arko, in February 2003. Kim Yoon-soo’s accession to the top post at the National Museum of Contemporary Art and Kim Chul-ho’s term as head of the National Center for Korean Traditional Performing Arts also sparked controversy among right-wing groups.

Late in its term, the Roh administration was criticized for allegedly using cultural policy to reward its friends and allies. Under Roh, Shin Sun-hee, older sister of the revered liberal lawmaker Shin Ki-nam, became president of the National Theater of Korea, and Moon Jae-sook, younger sister of another left-wing legislator, Moon Hee-sang, was designated as an intangible cultural asset for her playing of the gayageum 12-stringed zither.

Joo Ho-young, a member of the Grand National Party, has accused the National Museum of Contemporary Art of making 148 of its 263 purchases during Kim Yoon-soo’s tenure in 2007 from so-called “leftist artists.”

The history of the divide between right and left over cultural policy dates back to 1961, when the Federation of Artistic and Cultural Organizations of Korea was established. Often called Yechong in Korean, the group represented conservative artists.

Later, in 1988, the Korean People Artist Federation, or Minyechong, was launched for progressive and liberal artists. Since then, the two opposing groups have become the largest of their kind in Korea. As of this year, Yechong has 340,000 members and 127 branches, while Minyechong has 100,000 members at 50 branches.

Some blame those lopsided figures on a longstanding bias by the government. “Before President Kim Dae-jung, Yechong always received higher subsidies,” said Kim Han-gu, an official at Arko, which distributes state cash to the nation’s cultural organizations.

Ever since Kim Dae-jung’s term, the total subsidies given to Yechong and Minyechong have flip-flopped depending on the political colors of the sitting administration.

After years of controversy, Arko finally scrapped subsidies to Yechong and Minyechong this year. “Instead of giving them subsidies, they have to apply for each subsidy like any other organization does,” said Kim from Arko. “If their business proposal is good enough, they receive subsidies, but if it’s not there’s none.”

“What they need is to focus on certain promising genres and boost them,” said Yun Ho-jin, a musical director and head of the musical production company Acom International Company, famous for creating “The Last Empress.”

“But if you become the head of a certain cultural organization, you just don’t want to be blamed by your opposition. So you just hand out the same amount of money to each organization without considering each genre’s potential,” Yun said.

Political critic Ko Sung-kook explained that in Korea, culture has always been political. “Whenever a new government takes power, it needs to explain why it had to over from the previous government,” Ko said.

“If the government achieves this through cultural means, it becomes a strong government. But if it’s done by force, the government might seem strong, but inside it’s very weak. In that sense, the current government is not good at legitimizing itself.

“As long as there is politics, political clashes will exist in culture,” Ko concluded.

In the wake of the recent controversies, rumors swirled that the Culture Ministry was considering replacing Kofic and Arko with a new department that would take on both of their functions, but the ministry has denied it has any plans to change the current structure.

Good art may speak to anyone, regardless of age, nationality or political allegiance, but Korea’s cultural policy seems far from that ideal. And for those like Yang Ik-joon, who would rather just make movies, there seems to be no end in sight.