Japan’s Yuichi Komano, foreground right, misses a penalty shot during the World Cup Round of 16 match between Paraguay and Japan at the Loftus Versfeld Stadium in Pretoria on June 29. [AP/YONHAP]


PRETORIA - Paraguay beat Japan 5-3 on penalties following a 0-0 draw to reach the World Cup quarterfinals for the first time in its history on Tuesday.

Substitute Oscar Cardozo scored the decisive spot-kick at the Loftus Versfeld Stadium after Japan’s Yuichi Komano had smashed his penalty against the crossbar. Paraguay will play Spain in the quarterfinals on Saturday. The shootout was needed after 90 minutes of regulation time and 30 minutes of extra time failed to separate the two teams in a tense affair of few chances.

“It’s the first time that a team from Paraguay has made it to the quarterfinals, and the same would have applied for Japan,” said Paraguay coach Gerardo Martino. “I just think we were lucky during the penalty shootout, that made the difference.

“When you look at how the players played, the solidarity they showed, their enthusiasm, their will to make the history books, both teams did it the same way.

“Perhaps it wasn’t the match people wanted to see, but I don’t think either team has anything to reproach themselves for.”

Japan coach Takeshi Okada insisted he was proud of his team and took full responsibility for the failure.

“In terms of how we played I have no regrets at all. The players were wonderful, really wonderful and I’m truly proud,” he said. “They represented Japan and also Asia as a whole and they played until the end. I was not able to make them win, that’s my responsibility, I did not make them eager enough.”

Paraguay and Japan traded some quality scoring chances in the first half. But Paraguay initiated the attack and set the pace much of second half and extra time.

Disappointed Japanese fans heaped praise on their national football team early Wednesday despite the loss to Paraguay in the first penalty shootout of World Cup 2010.

Supporters in Tokyo screamed in despair when Japan’s Yuichi Komano hit the crossbar with his penalty kick after extra time failed to produce a result. Asia’s final hope of reaching the World Cup quarterfinals was dashed as Paraguay’s Oscar Cardozo scored the decisive spot-kick in Pretoria.

Some female fans wept as others crouched in disappointment and fatigue at a Tokyo cafe run by former star striker Hidetoshi Nakata.

“I cannot take this,” Akira Hayashi said at the cafe, where groans of dismay echoed as television footage showed the Paraguay team celebrate.

“But they really did their best,” said the 22-year-old. “They really showed the Japanese spirit.” 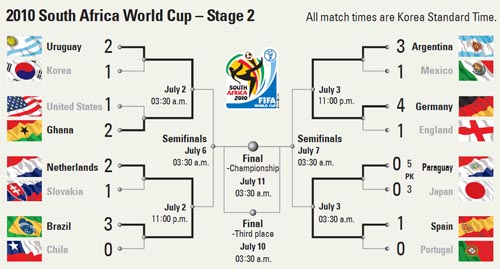 Taiki Nakazawa, 21, said, “They fought to the very last minute. Just an inch short in the penalty kick. Paraguay was only slightly stronger than us.”

“Of course, it would have been better if they had won,” Yamato Suekuni, 19, said. “But they really were impressive.”

The streets of Shibuya, the buzzing centre of Japanese youth culture in Tokyo, were flooded by dejected fans, despite the late hour after a game that kicked off at 11 p.m. Japan time.

At Saitama Stadium, north of Tokyo, some 5,000 fans, mostly wearing blue jerseys to match the team colors, gathered to see live television coverage of the match, despite heavy rain.

Bleached-blond goal ace Keisuke Honda dominated the front pages of Japanese sports newspapers on Tuesday, with the striker hoping to continue his form to carry the team into the quarterfinals. The striker, who plies his trade at CSKA Moscow, had become a national hero after scoring two goals and setting up another as underdogs Japan upset Cameroon and Denmark and went down fighting 1-0 to the Dutch in the group stage.

Meanwhile, David Villa netted his fourth goal of the World Cup on Tuesday, prizing a resolute Portuguese defense apart as he took Spain into the quarterfinals with a 1-0 victory.

Portugal had defended solidly for an hour in the second round showdown between the Iberian neighbors before Villa finally struck in the 63rd minute. Xavi flicked a ball through to him in the box, and though his first shot was blocked by busy Portuguese keeper Eduardo, Villa hit the rebound over him and into the net.