The argument for fingers

The argument for fingers 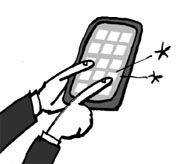 The earliest member of the Homo genus - to which humans belong - is called the “handy man.” Homo habilis lived over 2 million years ago and were excellent at using their hands to work primitive stone tools.

When Homo sapiens emerged over 250,000 years ago, they stood out for their advanced stone technology. Whereas Homo habilis had merely sharpened rocks, our early ancestors had hand axes and stone knives.

Scientists have suggested that there is a strong correlation between the use of one’s hands and brain development. Humans were able to outlive their prehistoric ancestors by developing tools that helped them survive. They could kill more animals faster with hand axes than the primitive stone tools used by other beings at the time, so their communities were able to expand and flourish.

Today’s parents are eager to exploit the connection between using one’s hands and brain development. In China, they even sell a special kind of chopsticks that is supposed to stimulate the intellectual development of young children. Smaller than normal chopsticks, and with rings where you put you’re fingers, they allow children who are just beginning to develop motor skills to eat with chopsticks.

Korean chopsticks have long been lauded in this country for their ease of use. Since they are of medium length and have round ends, young Koreans can use the chopsticks to pick up everything from pork to tiny sesame seeds. I wonder if such precise finger movements have helped Koreans in the soft power field.

Of course, writing is another task that requires the coordinated use of one’s hands. As one of the four traditional criteria for judging a person, writing was used in the past to asses both one’s character and intellect.

But in this age of iPhones and Google, how often are we really using our hands any more? The art of writing is being overshadowed by text messages and dictated memos. Up until recently, people still used their hands to type, but with the advent of touch screens and smartphones, people only need one finger.

I think that the person Google hates the most is Rodin’s The Thinker. When people want to know the name of an actor in a hit movie, they don’t stop to think about it. They simply pull out their iPhone or Android-based cell phone and Google search the movie.

There’s nothing smart about smartphones. My friends and I joke that companies like Apple and Google will go completely bankrupt if people start to think.

As we become a society in which the characteristics and intelligence of individuals are overshadowed by collectivism equal to that of ants, I wonder whether we can reclaim our hands and save ourselves from a world of one-finger living.