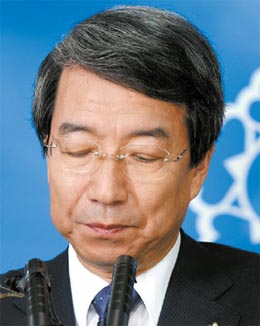 Prime Minister Chung Un-chan said yesterday he would take “full responsibility” for failing to pass the revised Sejong City bills at the National Assembly, and political observers believe another big reshuffle in the Lee Myung-bak administration is imminent.

Although Chung didn’t say whether he was resigning, political observers believe he will tender his resignation soon after Lee returns to Seoul on July 3 from Central America.

“As the minister who was responsible for mapping out the revision plan, I will take full responsibility,” Chung said. He also said that the conflicts and divisions created by the bills need to end.

The original Sejong City plan, put forward by Roh Moo-hyun in 2002, was to relocate the national government to the city in South Chungcheong. The country’s Constitutional Court ruled against Roh’s plan, saying the country’s capital could not be moved, and the president scaled it back to move many, but not all, government offices. That plan was passed into law in 2005 and will now proceed.

Controversy erupted when President Lee said moving government offices would create chaos. He scaled the plan down further to make Sejong City into an industrial, science and education hub, not a mini-capital.

Opposition parties as well as Grand Nationals loyal to Lee’s political rival Park Geun-hye fiercely opposed the revision and voted them down Tuesday in the National Assembly.

“Under the original plan, the president stays in Seoul while the prime minister and ministers stay in Chungcheong,” Chung said in a televised speech yesterday morning at Central Government Complex on Sejongno, central Seoul.

“When an urgent issue pops up, it would cause chaos as the decision-making process will be slowed down,” he said. “The government couldn’t guarantee Sejong to become a self-sufficient city under the original road map.”

Chung said that though he’s regretful that the revision bills were defeated he respected the Assembly’s decision and will work his best to transform the region into a mini-capital.

Chung had expressed his willingness to resign after the ruling Grand National Party lost the June 2 local elections to opposition parties, which was partly blamed on the unpopularity of the government’s plans for Sejong, but Lee refused. Officials at the Prime Minister’s Office said if Lee again rejects Chung’s resignation, Chung will “focus on various policies including education.”

Responding to the GNP’s defeat in the June elections, Lee said on June 14 that he “will improve the systems of the Blue House and the cabinet and reshuffle officials as soon as the preparations are completed.”

“Labor Minister Yim Tae-hee was regarded as a plausible candidate for presidential chief of staff, but he’s also one of the candidates to replace Chung,” an official from the GNP said. “It is likely that Minister Yim can become either the prime minister or minister of another key ministry.”

Another GNP official said he heard from Blue House officials that National Tax Service head Baek Yong-ho is the strongest candidate to replace presidential chief of staff Chung Chung-kil, who expressed his intention to resign on June 3. KT Chairman and CEO Lee Suk-chae is being discussed as the new chief policy director of the Blue House, sources said.