Recovering the lost stones of Sungnyemun

Recovering the lost stones of Sungnyemun 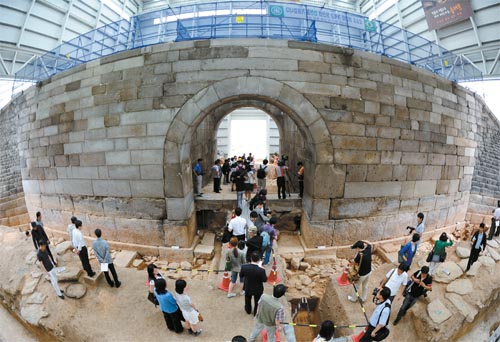 When an arsonist set fire to Sungnyemun on Feb. 11, 2008, Korea lost its No. 1 national treasure. The entire second level of the ancient city gate, also known as Namdaemun, was destroyed.

But in their effort to rebuild Sungnyemun, which was originally erected in 1396, experts have discovered the original foundation stones, which date back to the early period of the Joseon Dynasty.

From a comparison of Sungnyemun blueprints from the 15th and 17th centuries, experts discovered that the ground around the gate had risen roughly 1.4 meters (4.6 feet), obscuring the foundation stones. Researchers said their new findings will revise their estimate of the gate’s height to 8 meters. [NEWSIS]