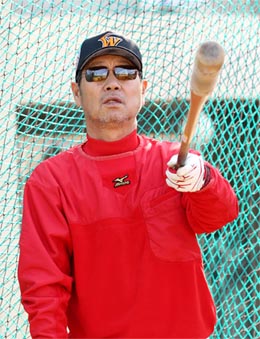 Kim Sung-geun and his SK Wyverns have dominated the field so far this season and have no intention of letting up.

Earlier in the season, Kim said in a televised interview, “I want to make the younger managers around the league fear baseball games.”

A veteran manager who’s respected as one of the best tacticians in the game, Kim knows how difficult it can be to produce a winning team. And now that he thinks he has one, he wants to impress upon the league’s younger managers just how hard that struggle was.

In a rematch of last season’s Korean Series, the Wyverns pulled off a 10-5 come-from-behind win over the Kia Tigers on Wednesday night. With the victory, SK reached 50 wins on the season in just 72 games. They currently hold an eight-game lead over the second-place Doosan Bears in the KBO standings. It was the Kia Tigers’ 11th consecutive loss and put the defending champions in a tough spot at sixth place with a record of 34 wins and 42 losses.

The latest series against Kia was indicative of Kim’s finely detailed approach to the game. In two straight games, Kim pulled his starting pitcher in five innings or fewer and did not allow him to give up more than three runs. He used a total of eight relief pitchers from the bullpen.

From the decisions Kim made throughout the game, one might be forgiven for thinking that SK were actually the team on the verge of their 11th consecutive loss. Its manager looked like the one who was more hungry and desperate for a win.

The Tigers led the game 5-2 before giving up eight runs to reach 11 consecutive losses, a franchise record since the club sponsorship change took place in 2001. With Yoon Seok-min out, Kia’s bullpen has not lived up to its potential. However, the biggest loss for the Tigers was last season’s Most Valuable Player, Kim Sang-hyun.

Kim Sang-hyun had a breakout season last year with a .315 batting average, 36 home runs and 127 RBI. With Choi Hee-seop, the MVP gave the Tigers one of the most potent batting lineups in the league.

The 2010 season has been a different story for the third baseman. Kim’s production has dropped to .202 with eight home runs and 24 RBI so far this season. He has been hit hard by injuries, missing 34 days due to knee surgery earlier this season, and is expected to miss more games after injuring his ankle against the Doosan Bears on June 25.

Park Ki-nam, who had filled the offensive void left by Kim, suffered an elbow injury and is currently doing a rehab stint with the Tigers’ minor league affiliate.

The Tigers have put themselves into a tough situation and face another difficult stretch of games against the Samsung Lions and the Doosan Bears in their next six games.

Kia pulled off a dominating month of 20 wins and four losses in the month of August last year. Anything short of a near perfect summer will make it difficult for the Tigers to make the postseason.