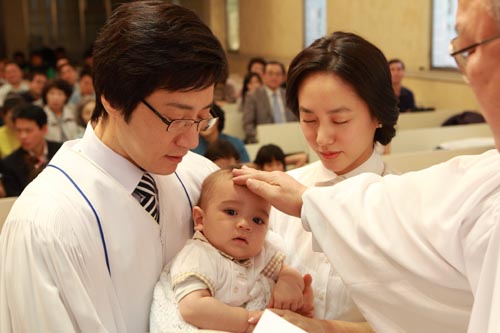 Ju Young-su (Kim Myung-min) and his wife (Park Ju-mi) with their daughter in “Man of Vendetta. Provided by Daisy Entertainment

Films centering on kidnapped children, their terrified parents and their struggle to get their children back have been around for many years, which means it is a daunting task for a filmmaker to produce a distinctive film with that plot.

But that was just the challenge first-time director Woo Min-ho was looking for. The new film, “Man of Vendetta,” opens this week.

Without giving any information about the protagonist, Ju Young-su (Kim Myung-min), and his family, the film starts from the moment of kidnapping. After the police blow their chance to catch the kidnapper Choi Byung-chul (Um Ki-joon) and he escapes, the film flashes forward eight years.

Instead of the neat and tidy minister he once was, a man who used to tell his followers to forgive their enemies, Ju is a different person. As a businessman, Ju bribes his affiliates; in his personal life he has become more violent and encourages his wife to give up on finding their daughter.

But Ju’s life changes again when he receives a phone call from the kidnapper, who demands a ransom in exchange for the girl.

The call shakes Ju awake and he vows to get his daughter back.

After failing to secure the ransom, Ju lays a trap to catch the kidnapper.

In depicting Ju’s transformation from pastor to broken human to devoted father, the director avoids the cliche of the happy family whose life is ruined by the loss of a child. In telling his version of the story, however, the director doesn’t focus enough attention on plot and character development.

Due to the lack of information about these crucial elements, scenes that are supposed to be sad are not that sad. The result is that Kim Myung-min, an actor who is known as a chameleon, fails to shine in a role that could have been one of his best yet. That’s a pity because Kim is one of a few truly skilled actors in the Korean film industry.

In one scene, Ju goes to the hospital to see his wife, who has been in a car accident and is now in a coma. When he gets to her room, he tells her that their daughter is alive and that he is going to find her. Then, he turns off her life support system. Ju sobs, but I didn’t feel anything.

It’s the same with Choi. Because we don’t know him, we don’t care about him. It is just disgusting to see him killing people.

Despite the weak structure, there are a couple of good scenes in the film. There is a thrilling scene in which Ju and Choi confront each other over the bag of ransom money at an ice hockey rink. The ending scene, in which the daughter and Ju reunite, is moving.

Maybe because I’m a mother, it was sad to see the daughter, who had gone through so many terrible things, smile when she looks at her father.