Cocktails to beat the heat, like Hemingway in Cuba

Cocktails to beat the heat, like Hemingway in Cuba 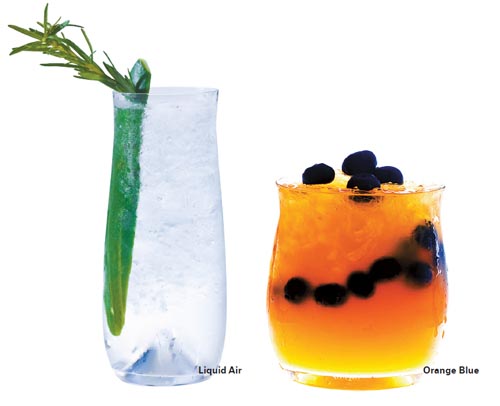 During his 10 years in Cuba, Ernest Hemingway was known for drinking cocktails. A cool rum daiquiri or mojito in the heat of the Caribbean summer was a source of joy. The writer was even said to keep cocktail ingredients at home in an ice-filled bucket.

As the thermometers rise in Korea, cocktails can be a wonderful way to cool off - and the art of creating them has come a long way since Hemingway’s time. Kim Hyun-jin, the president of the Korean Bartender Guild, shared a few of his secret summer cocktail recipes to make at home.

Three molecular cocktails show the wide range of the form, including latte-like foam, a caramel candy cocktail and a cocktail shaped like Asian noodles. By Kwon Hyuk-jae

Some Asians become chilled when imbibing very alcoholic drinks because it forces blood to the surface of the skin. But cocktails don’t have to be high in alcohol to be delicious, nor does it have to be diluted with ice or juice. You can make a Spicy Soda with just vodka and fruit vinegar - pour each into a shot glass and mix - or add more flavor with a smidgen of black pepper.

Or try a watermelon martini: Mix two parts vodka and one part lemon juice, then blend in a fist-size chunk of watermelon. In this cocktail recipe, the unpleasant alcoholic scent is replaced with that of a delightful summer fruit. According to Kim, in 2008 the American pop group the Backstreet Boys drank over 70 glasses of this watermelon martini in one night while on tour in Korea.

Kim also suggests mixing one part whiskey with three parts apple juice for a drink with a sweet aftertaste, as the peat scent of the whiskey blends well with the cool juice.

Try a “Liquid Air” by making a regular gin and tonic, then add crushed cucumber.

For a Korean twist, add one part lemon juice to three parts soju, then pour in an equal amount of traditional sujeonggwa fruit punch. The soothing cinnamon and persimmon flavors overpower the harsh soju. Another interesting idea: three parts makgeolli with one part whiskey.

If there are younger partygoers, try Kim’s Orange Blue or Very Berry. For the former, pour equal parts mango juice and grapefruit juice and add blueberries for an attractive and texture-filled punch. 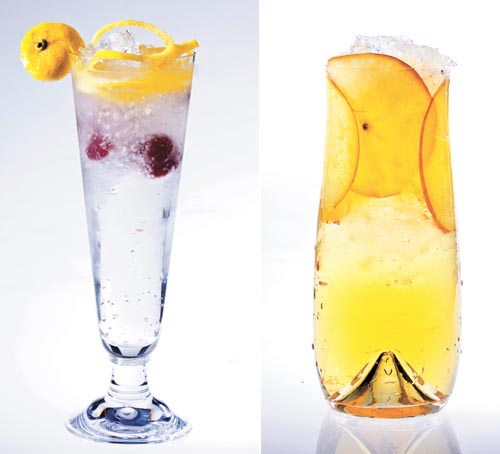 The Very Berry requires a long glass filled with lemon-lime soda. Squeeze in half a lemon, then cut the peel into a spiral and use it to decorate the top of the glass. Plop in a few berries of your choice.

Even beer can be used in cocktails. Try it with ginger tea for a refreshing evening cocktail that will cool you off at first, then warm you up later as the sun sets. 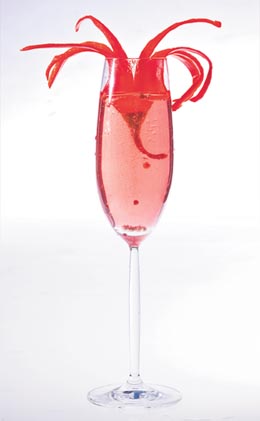 Liberated from the glass

The cutting edge of scientific cuisine is a field known as molecular gastronomy, and bartending hasn’t remained untouched by the craze. Molecular cocktails bubble, pop and melt in the mouth, mixing alcohol with liquid nitrogen and other food chemicals. Some of these cocktails recall cotton candy, ice cream or gelatin desserts.

Molecular cocktails were first developed in 2005 by Herve This, the French scientist who coined the phrase “molecular gastronomy,” with eight other well-known French bartenders. Back then, they called it, “boozy ice cream.” As the name implies, many of the cocktails involve freezing alcohol into a sherbet-like form. In March, the famous Czech bartender Paul Tvaroh introduced molecular cocktails to Korea through “food&” magazine.

Everyone knows how to make a classic martini with gin and vermouth. It’s a dry drink with around 40 percent alcohol concentration. If you’re not a hard drinker, but you’d like to enjoy a martini anyway, Kim suggests you ask the bartender to shake it when you order, as the ice will melt faster and dilute the alcohol.