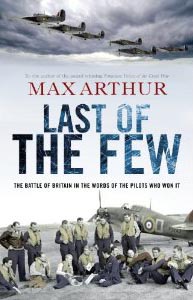 Last of the Few

LONDON - As the 70th anniversary of the Battle of Britain approaches this summer, the last of Winston Churchill’s “few who saved the many” have been recalling their experiences.

Their memories of those 13 terrifying weeks in 1940 which saw 2,500 young pilots pitted against the might of the Luftwaffe have been collected in a new book by oral historian Max Arthur.

Some of those involved, now in their 80s and 90s, gathered in London this week for the launch of “Last of the Few,” published by Virgin Books.

Here are some extracts from the book:

Flying Officer Al Deere (New Zealander): “We used to try and get up above them and come in from out of the sun but it didn’t always work that way. Sometimes you didn’t see them - they were somewhere up in the sun. When you became engaged it was every man for himself. One minute there were Spitfires and Me 109s going round in circles; the next you were all by yourself. That was if you were still there.”

Pilot Officer Frank Carey: “I was attacking a Do 17 and it did a snap half-roll, which was an extraordinary thing for a kite of that size to do. I did the same and followed it closely down. It was nearly vertical; in fact, the pilot was dead, I think ...

But before I’d realized that, the rear-gunner fired and hit me well and truly. Stupidly, perhaps, I’d been following it rather closely because it was such a fast aircraft and I knew it could get away from me.

If I’d known the pilot was dead, of course, I wouldn’t have bothered. Then I was busy getting myself down.

First of all, I was on fire. So I thought, ‘Right, I must get out.’ I thought what I had to do in my mind, pulled the thing up into nearly a stall, and stood up ...

The aircraft slowly got itself into a dive, and the faster it went, the harder it was for me to get out. My ticker was going at a fairly fast rate; but at least the fire seemed to have gone out and I was able to select a big ploughed field and had no difficulty getting it down.”

Flight Lt. James Brindley Nicolson: “July 16 was a glorious day. The sun was shining from a cloudless sky and there was hardly a breath of wind anywhere.

Suddenly, very close, in rapid succession, I heard four big bangs. They ... had been made by four cannon shells from an Me 110 hitting my machine. The first shell tore through the hood over my cockpit and sent splinters into my left eye, nearly severing my eyelid - couldn’t see through that eye for blood. The second shell struck my spare petrol tank and set it on fire. The third tore off my left trouser leg and the fourth struck the back of my left shoe, shattering the heel and making quite a mess of my left foot.

The effect was to make me dive away to the right. Then I started cursing myself for my carelessness. I was just thinking of jumping out when an Me 110 whizzed underneath me, right into my gun sights. He was going like mad, twisting and turning as he tried to get away from my fire.”

Flight Lt. Robert Stanford Tuck: “The last affair was a regular shooting match. I arrived back at base with no oil, no glycol and the sliding hood and side door of my Spitfire shot away. I had a cannon shot through the tail which left only two inches’ play on the elevators with which to land - and I had no flaps, no brakes and a flat tire.

I did somehow manage to put it down all right, and as I finished my landing run, the engine seized up. That Spitfire was too shot up and damaged to fly again, but I was lucky enough to escape with only a slight wound in the thigh, caused by a piece of metal flying off the rudder bar.” Reuters

Last of the Few