Set sail for a summer at sea

Set sail for a summer at sea 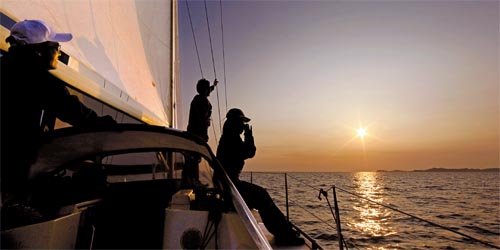 On the afternoon of May 22, a young boy was sailing leisurely through Mulgun Port, in Namhae County, South Gyeongsang, on a dinghy yacht. The boy, who was also the skipper, is Han Jeong-hun, a first-year student at Mulgun Middle School.

Sailing has become part of Han’s daily routine since the town hall became a sailing school last year. Since then, Han’s weekends have been spent at sea and after school the sailing school is the first place he goes.

Now, Han is known in his neighborhood as the “Marine Boy.” He has become so good at sailing that he even sails in difficult waters with ease, without outside help.

He says that his dream is to sail around the world, even if his father, a fisherman, would still rather see him on a fishing boat than on a yacht.

Mulgun-ri is an old village known for anchovy fishing. A generation ago, the boys in the village imagined they would have careers as fisherman, like their fathers and grandfathers before them. The boys living here now, however, are more likely to dream about growing up to be the captain of their own yacht. 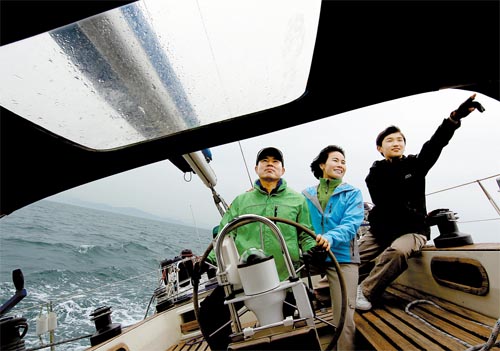 Coens Energy CEO Lee Geun-taek, in the foreground, the captain of the cruiser Coens Blue, steers the ship through a rough patch of sea.

This change was largely brought about by the establishment of the Namhae Sailing School. In fact, all 30 students at Mulgun Middle School are now registered at the sailing school.

Lee Joon, 40, a research professor at Korea Advanced Institute of Science and Technology, is also a dedicated sailing student and attends classes at Namhae Sailing School every weekend. Lee entered the world of yachting 14 years ago while he was in college in the port city of Busan. Since he started attending classes at Namhae, he has mastered the art of sailing both a dinghy and a cruising yacht.

Now, he has set his sights on one day entering the Transatlantic Yacht Race, in which participants sail across the Atlantic on a 6.5-meter-long (21-foot) dinghy called a Mini 6.50, traveling a total of 4,500 kilometers (2,796 miles). The race, which takes the competitors from France through the Canary Islands to Brazil, is a physical, technical and mental test for the participants, who spend the entire two-month period by themselves at sea.

To enter the race, Lee will first need to buy a Mini 6.50, which he estimates will cost about 50 million won ($42,000). That is quite a burden considering his annual salary, but he is too excited to be concerned.

“Since this is my dream, I plan to save my money as well as hone my sailing skills in the coming years - even if I have to wait until I am a gray-haired old man.”

Han and Lee are just two of a new generation of sailing enthusiasts in Korea, where sailing was once considered to be an activity for a privileged few.

But events such as last month’s Korea Match Cup 2010 have ignited the sailing industry. The cup is an international race that is part of the World Match Racing Tour. The Korean leg of the race was held at Jeongok Marina in Hwaseong, Gyeonggi.

Claire Leroy, who participated in the Busan Cup International Women’s World Match Race two years ago and currently ranks first in the world, once said that sailing comes as natural to her as walking, because she grew up in a seaside village with her grandfather and father, both of whom were master mariners. She said in an interview two years ago that she sails around the world two to three months a year.

Last year, this reporter visited Hayama Marina, located in the eastern part of Yokohama, Japan, where that country’s first yacht club was established in 1964.

“Yachting is not just for the rich,” club president Tanaka Koichiro, 60 said. “Our club is always bustling with children every weekend, and I believe that a yacht club should be like a playground for kids living on the coast. And yachting doesn’t necessarily require one to buy a boat.” 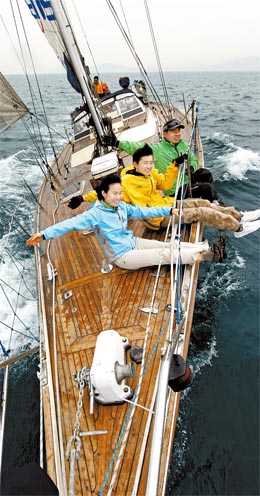 Members of Coens Blue, a sailing club composed mainly of employees of Coens Energy sail near Sooyoung Marina, which is at Haeundae Beach in Busan.

There are six sailing schools in South Gyeongsang alone, out of a total of 20 nationwide. Some are operated by local governments, while others are run by private yacht clubs and associations.

About 20,000 people in South Gyeongsang visited sailing schools last year and that number is expected to grow to around 40,000 this year.

There are sailing schools on all three coasts, but most are found along the southern rather than the western coast, which is more affected by tides.

The marina at Susan Port, Yangyang County, Gangwon, is one of the most recent additions to the sailing industry, along with an international yachting school that opened last year at Gimnyeong Port on Jeju Island.

The Tongyeong Yacht School is one of the oldest sailing schools in Korea. It has long been a sailing center and offers a variety of educational programs. Thus far, it has produced more than 20,000 trainees. From June to September it has a program for people who want to acquire a sailing license.

Jinhae Marine Leisure School, which opened last August, is one of the six sailing schools in South Gyeongsang. It has about 50 top-notch yachts, a clubhouse, an anchorage harbor and various outdoor facilities. Former members of Korea’s national sailing team work there as instructors and various courses are offered for people of all ages.

Namhae Sailing School, the South Gyeongsang facility that operates out of Mulgun Port, is a good place for beginners. The port is relatively calm and quiet, making it a safe place to sail. South Gyeongsang residents can take classes at the school for free.

For the coming summer vacation period, usually from July to August in Korea, Namhae Sailing School plans to hold sailing camps for elementary, middle and high school students. The school will operate three camps, each of which is a five-day and four-night event for the cost of 430,000 won.

Other sailing schools will offer summer camps as well. Jinhae Marine Leisure School’s camp will be conducted in English and the fee for the three-day and two-night camp is 165,000 won. Meanwhile, the Busan Sailing Federation is offering a junior sailing program, also during summer vacation. The program runs for three days and two nights and costs 230,000 won.

If cost is a concern, the schools operated by the Seoul Yacht Association and the Busan Sailing Federation offer classes at a relatively low cost.

Meanwhile, the Tongyeong Yacht School has a special program for tourists. The program includes a three-hour tour on a sailboat around the nearby Hansan Island (50,000 won per person). The school also caters to men who want to propose to their girlfriends at sea, and to newlyweds who want their wedding photos taken with a backdrop of clear sky and open water.