Diplomat pedals across Korea to pay her respects

Diplomat pedals across Korea to pay her respects 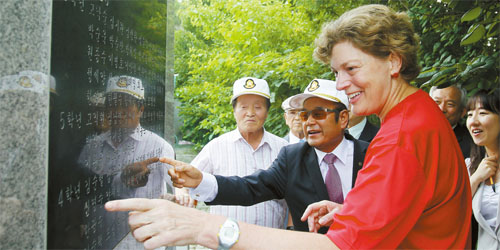 The Korean War Veterans Memorial in Washington says, “Our nation honors her sons and daughters who answered the call to defend a country they never knew and a people they never met.” But as United States Ambassador Kathleen Stephens commemorates the 60th anniversary of the Korean War, she is no stranger to Korea, or its people.

Stephens paid her respects at memorials in Hoengseong, Gangwon and Yangpyeong, Gyeonggi during a 50 kilometer (31 mile) group bike trip Monday. The two stops were chosen to honor the Battle of Hoengseong (Feb. 5-18, 1952), in which 12,700 Korean and 2,500 U.S. troops died, and the Battle of Yangpyeong, which was the first victory for United Nations troops after China joined forces with the North in the war.

The latter battle raised the morale of the UN troops, which led to the reclaiming of Seoul and some land around the 38th parallel, the line that separates the North and South.

Stephens, a cycling aficionado, said this method of transportation allowed her to more closely connect with the sights around her.

“South Korea made miraculous progress after the war, which required many people’s sacrifice and efforts. I wanted to observe the results in detail while cycling through,” she said.

In Hoengseong, Stephens visited the Korean War Student Soldiers Memorial, which honors the middle and high school students forcibly enlisted during the war. At the memorial, on the campus of Hoengseong Middle and High School, Stephens spoke with three veterans who had served as student soldiers.

One veteran, Kim Hyeon-tae, 78, reminisced, “The North Korean army invaded this town only four days after the war started, so we went to fight in our school uniforms.”

Stephens replied, “You all made great sacrifices in that terrible battle. That sacrifice is a cornerstone to South Korea’s progress,” adding that she felt a deep sorrow for children who were killed in that battle.

The Hoengseong memorial honors 13 dead student soldiers and 62 who survived.

En route to Yangpyeong, Stephens’ group of cyclists in red T-shirts drew the attention of passersby. Many local residents welcomed the visitors as they traversed the challenging 50 kilometers of country road.

When one woman offered the group her home as a place to rest, the ambassador decided to take a 15-minute break. As Stephens admired a chestnut tree in front of the house, the woman exclaimed, “Wow! The American ambassador is so good at Korean!”

Upon the group’s arrival at the Jipyeong-ri War Memorial - and a quick shower - the ambassador greeted 30 soldiers from the 20th Capital Mechanized Infantry Division and Yangpyeong Governor Kim Seon-gyo.

Stephens emphasized that Korea and the United States must not forget the meaning of the Korean War.

After paying homage at the memorial, Stephens went to the movies with local college students and American English teachers. The group saw “71: Into the Fire,” starring T.O.P. from Big Bang and Kwon Sang-woo, which commemorates 71 student soldiers who fought during the Korean War.