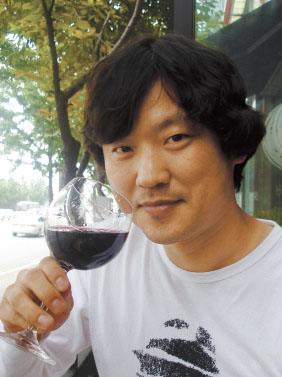 Wine adviser Kim Seong-il, freshly certified, enjoys a glass at a cafe near his office. Provided by Kim

Wine and classical music are both considered luxurious pursuits in Korea, an idea that newly certified wine adviser and longtime opera singer Kim Seong-il is seeking to change.

“I might have pursued the most luxurious fields people can think of. But the way I came along was not luxurious at all. I want to share my experience with others so that wine and classical music can be more democratic in some sense,” said Kim.

“Those two are considered hobbies only high-class people can afford to enjoy. But I don’t think they only appeal to certain people. I want everyone to understand art as it is intended upon creation - to give joy to the people who enjoy it,” he said.

The baritone, whose career spans two decades, passed certification the last week of June to become a wine adviser after competing in two contests held by the Sommelier Association of Korea.

“If you think about it, wine and music are in harmony,” Kim said.

“Music reminds the audience of something hidden inside their memory. It basically stimulates people’s imagination. And the outcome of that stimulation differs from each person since everyone has had a unique life experience.”

It’s not too different from how wines mature, come to think of it.

Kim did not lead a life of privilege. Although he began professional voice lessons in high school and majored in vocal performance in college, he struggled in his pursuit to create music. When his father passed away during college, he felt guilty about asking his mother to cover tuition and instead scraped by on his own.

“Since I started later, I struggled more to find my own tone and voice in singing. However, that long struggle made me experience various emotional states, which helped me sense a wider range of taste in wine.”

During his studies in Italy, a country with a rich love of wine, Kim was hardly a oenophile.

“I thought it was too luxurious a hobby for me to have,” he said. “I was just a poor international student. I even cooked and sold Korean food such as gimbap [seaweed rice rolls] to make money to cover tuition and housing.”

But being too poor to drink was actually a blessing in disguise.

“It actually helped me with tasting the tiniest, and the most minimal notes in wines. People who indulged in alcohol in their 20s wouldn’t be able to detect every little flavor. I’m thankful that my tongue remained more sensitive than others,” Kim explained.

Even now, Kim doesn’t expect wine or music to be moneymaking pursuits. “If I were to sing for money, I would have to sing even when I don’t want to. Wine is the same. The license is for me to enjoy wine better and to the fullest,” Kim said.

Currently, he supports himself by buying and assembling machines and electronics used in cafes.

But with his certification, he wants to share his knowledge with as many people as possible. “I’ve been scribbling down thoughts in hopes of getting books published some day in the future,” Kim said.

He also plans to open up the world of both wine and opera to the general public by hosting informational lectures.