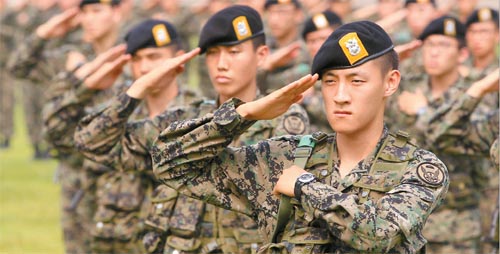 The 1,000-strong unit, named the International Peace Support Force, was yesterday inaugurated with a ceremony at the Army Special Task Force Headquarters in Incheon. [YONHAP]

The 1,000-strong band, named the International Peace Support Force, was inaugurated with a ceremony at the Army Special Task Force Headquarters in Incheon, the Ministry of National Defense said. Korean Army Chief of Staff Hwang Eui-don attended, along with 350 government dignitaries and military personnel.

Previously, Korean soldiers sent overseas for peacekeeping operations were selected from existing forces. Having a unit dedicated to overseas operations will make Korea’s PKO activities more effective, the ministry said. The ministry will also create a 2,000-strong backup unit for the force.

At the inaugural ceremony, Hwang said the creation of a permanent force for overseas dispatch will improve Korea’s image internationally. Korea, which will host the G-20 Summit in November, has increasingly been aware of its international duty, commensurate with its rising international status, he said.

“We will get fully ready for requests for the dispatch of overseas troops anytime through practical training programs,” Hwang said.

Nicknamed Onnuri, a Korean word meaning “the entire world,” the International Peace Support Force will be able to be dispatched within one month after a request is received and approved, the ministry said.

While home, the troops will learn basic strategies for performing in overseas assignments. When they get an assignment overseas, they will get an additional training in the language and culture of their destination.

The ministry said the Korean troops already overseas on PKO missions will be gradually replaced by the Onnuri team.

Yesterday, some of the 320-troop “Ashena” unit, which will protect Korean civilian aid workers in Afghanistan, left for the war-torn country. The country also sent about 240 troops earlier this year to help quake-stricken Haiti. The backup squad, the ministry said, will be comprised of 1,000 special force soldiers and 1,000 non-combat soldiers, such as engineers, transporters and medics. The 1,000 special force soldiers will perform regular duties with their existing units, but will be summoned to replace Onnuri soldiers when needed.