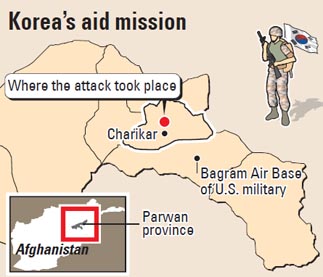 Two rockets were fired at a Korean construction site in Afghanistan on Wednesday night, just before a Korean aid team was scheduled to celebrate the beginning of its mission there.

The attack came at a time when the government is trying to expand its reconstruction operations in the war-torn country in collaboration with the U.S. military.

According to Korea’s Foreign Ministry, unidentified attackers mounted two rocket attacks on the site where a base will be built for Korea’s Provincial Reconstruction Team at Charikar, the capital of the northern Afghan province of Parwan. The attacks were made around 10:10 p.m. One of the two portable rocket-propelled grenade shots landed 200 to 300 meters (655 to 985 feet) away from the base, while the other landed closer to the construction site.

Security guards fired back two rockets, and there were no casualties, ministry officials said.

There were 58 Korean construction workers at the site along with 60 security guards protecting them, said Foreign Ministry spokesman Kim Young-sun.

“Explosives experts from the U.S. military have been dispatched and they are investigating the site,” Kim said during a briefing yesterday.

“We have not been able to identify who’s behind the attack, but it may be Taliban or locally-based insurgents,” he said.

There was little property damage to the project, which is 30 percent complete. The site, spreading over 430,000 square meters (106 acres) of state-owned land, will accommodate a hospital; residential facilities for Korean soldiers, aid workers and police; job training centers for locals; and a facility to train the local police workforce.

A total of 147 Koreans are currently operating in the area.

An additional batch of Koreans are scheduled to arrive in early July, pushing the total number to 289, including 49 civilians, eight policemen and 232 soldiers.

They are expected to be involved in job training and medical services for locals, operational training for the local police and other training to strengthen the Parwan provincial government’s administrative capabilities.

Since the government announced last October that it would send troops Afghanistan, the Foreign and Defense Ministries have sent fact-finding units to study the terrain and assess the security situation there. After the rocket attacks, the government said it would beef up security.

“We’re recognizing that we need to take more precautions and safety measures,” said Kim yesterday. The ministry held an emergency meeting with the Defense Ministry, the National Police Agency and Korea International Cooperation Agency. Last December, the Taliban threatened “bad consequences” if Korea went ahead with the deployment. The Taliban accused Korea of reneging on a promise that it would never again send forces, and said it “will never resort to a soft approach anymore.”

Korea stationed troops in Afghanistan for five years before withdrawing them in late 2007. The pullout, though previously planned, came after the Taliban demanded their withdrawal during a hostage crisis in which insurgents killed two Koreans.