Exhibit tells stories of people who survived the war

Exhibit tells stories of people who survived the war 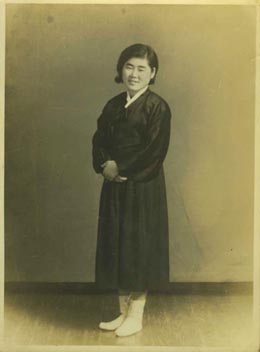 Song Geum-soon in her early twenties

To commemorate the 60th anniversary of the Korean War, the National Folk Museum of Korea is currently holding an exhibition through Aug. 23 called “Guemsoon: Overcome Adversity.”

“Geumsoon: Overcome Adversity” is a song that is familiar to the generation who lived through the 1950-53 Korean War.

The exhibit describes the experiences of people who survived the war, including families who were separated when North and South Korea were divided. Their stories are told through photographs, video and items from the period.

In organizing the exhibit, the museum’s curators sought out women named Geum-soon who took refuge in the South during the Korean War. They invited 10 of these women to share their stories at the exhibition opening on June 22.

The JoongAng Sunday met with three of these ladies to hear about their experiences.

Song Geum-soon, 72, from Yeonbaek, Hwanghae, was in fifth grade when the war broke out, but she still has vivid memories of those days.

“At first, I didn’t even know what was going on. We were just elated that we didn’t have to go to school,” Song recalled. “Elementary school kids nowadays are aware of their surroundings but things were different back then. We didn’t know anything. At the time, I thought it was fun to go from place to place all over the country.”

It would not take long for Song to see the severity of the war.

“We were lucky since our parents were able to take some of the family’s savings with them. We suffered less as a result,” she said. “For most, however, it was really tough. In the immediate moments after the war, there was severe discrimination against people from the North. People wouldn’t even rent out rooms or sell things to them. Some people didn’t allow their children to marry a person from the North.”

Today, Song says she has just one wish.

“Do you know how lucky you are to be able to visit your hometown?” Song asked. “It was many decades ago, but I still remember clearly. I want to visit my hometown just once before I die.” 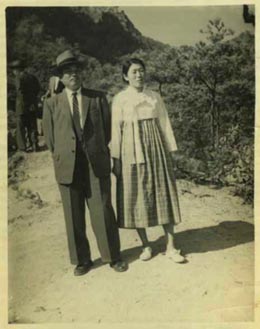 Ko Geum-soon with her husband during an outing in 1954

“Immediately after liberation, Russian troops entered the northern provinces. They were difficult to deal with,” said Ko. “Some of them looted our farms for food and bothered the women.”

The family’s decision to leave their hometown was not related to the presence of the Russians, but rather the new rule imposed by the ruling communist faction that decided to take the family’s orchard and factory.

“They took everything. I think my parents realized then that they wanted to leave,” said Ko. “People today don’t realize the atrocities of war. They don’t know what it’s like to see people get killed or to be separated from their parents and siblings for the rest of their lives.” 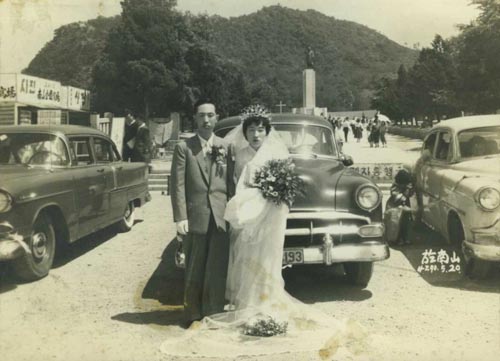 Ham Geum-soon on her wedding day in 1957. [JoongAng Sunday]

Ham Geum-soon, 77, came from a well-to-do family that ran an orchard in Hamhung, South Hamgyong. She lived in Kim Il Sung’s communist-controlled North for seven months during the war until her family decided to flee in January 1951.

“Some say everyone from the North is communist, but after Korea’s liberation from Japan, I remember everyone waving Korean flags,” Ham said. “But then Kim Il Sung and the communist government came along and the world became a strange place.”

“If Kim Il Sung had treated everyone fairly, why would I have sought refuge in the South?” she asked. “At first the communist ideology of working together and sharing things sounded good. But working hard and giving everything to the state, and no freedom? Who would take to a political system like that?”