A STRATEGY BEGINS TO FORM
Skilled soldier enters the fray

Last week, General Paik recounted the escalation of the Battle of Dabudong, during which untrained student soldiers were sent in to supplement the ROK troops amidst the growing number of casualties in the war.

When reading historical novels, we often come across a familiar plot in which a soldier who is in a tough situation and sure to meet a gloomy fate is rescued by his team. The news that reinforcements are on the way is a moment of pure joy for the man in combat.

This may make some wonder what it feels like for soldiers who are surrounded by the enemy and desperately defending their fort when reinforcement troops arrive. I know something about this. 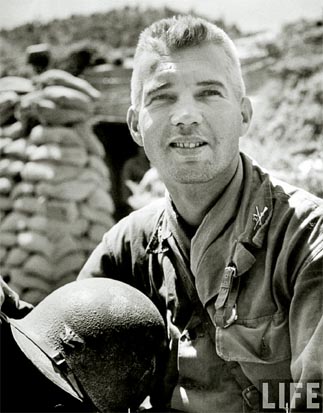 A shot of Col. John H. “Mike” Michaelis of the U.S. 8th Army’s 25th Division, 27th Infantry “Wolfhounds” Regiment in an edition of Life magazine. Colonel Michaelis and his 27th Regiment, along with the ROK 1st Division, defended the Dabudong line in August 1950.

The carpet bombing mission carried out by the U.S. Air Force on Aug. 16, 1950, basically wiped out enemy support units, along with their equipment and other goods, just west of the Nakdong River. But that did not stop the surviving North Korean troops on the front lines from continuing their attack.

It was on Aug. 17 - a day after the carpet bombing mission - when Col. John H. “Mike” Michaelis of the U.S. 8th Army’s 25th Division, 27th Infantry (“Wolfhound”) Regiment, stepped into the ROK 1st Division’s command post at Dongmyeong Elementary School.

As one of the officers rising within the ranks of the U.S. Army, Colonel Michaelis would go on to become a four-star general and the Commander in Chief of the United Nations Command, U.S. Forces Korea from 1969 to 1972.

As a West Point graduate, class of 1936, Michaelis rose through the ranks during World War II and was days from turning 38 when he joined the Korean War. The first impression I had of Colonel Michaelis was that of a man with good looks and sharp eyes. He was ranked as a lieutenant major when he arrived but was bumped up to colonel soon after arriving in Korea.

Colonel Michaelis had brought with him what was considered the top group of support troops to help the ROK 1st Division. He started by briefing me on his assignment.

“I came to protect Ganseon Road. We will divide the 914-meter-long [1,000 yards] road into two and place our troops there,” Colonel Michaelis said.

My first question for him was the most pressing: “How would you describe the fighting power of your regiment?”

He replied that it was at full strength, but I urged the colonel to be more specific.

“We have at our disposal one armored-tank company and M114 155mm howitzers and M101 howitzers,” Colonel Michaelis replied. “We also brought with us an ALO [air liaison officer].”

I was very pleased to hear the news. The fire power of Colonel Michaelis’ 27th Regiment was equivalent to that of one ROK division. Furthermore, Colonel Michaelis had brought with him an ALO, who could radio for air support. I felt as if an invincible force had come to our aid.

During the Korean War, the ALOs were Air Force officers. At the time, the U.S. Army did not have enough air support of its own. The ALOs carried field telephones and, upon surveying the situation on the battlefield, called for air support. The Air Force headquarters would then send in fighter planes or bombers to support the troops on the ground.

Despite my true feelings of elation, I could not reveal them all to Colonel Michaelis. To make matters worse, I was the type of person that did not show my emotions easily. Having observed my stoic reaction, I guess Colonel Michaelis thought that it would be best to provide more information.

“Brigadier General, I have one more piece of good news to add,” Colonel Michaelis said. “I have permission to use an unlimited number of artillery shells.”

I could not help myself. I think my facial expression drastically changed upon hearing such news. Up until that time, both the ROK and the U.S. Army had a limit on the amount of artillery shells it could use in battle.

Decisions were made on a daily basis as to how many shells an artillery unit could use based on the number of shells in its possession on that particular day. The absence of such restrictions meant that ROK and U.S. forces were now free to deploy their artillery units at will without worrying about how much ammunition they would use.

I now felt we had the full support of one of U.S. 8th Army Lt. Gen. Walton H. Walker’s “fire brigades,” which consisted of the 27th Infantry Regiment and the Provisional Marine Brigade.

In the ensuing days, I accompanied Colonel Michaelis on his rounds. This was all in an effort to learn his tactical combat skills.

Colonel Michaelis was quick and efficient in carrying out assignments. He started by dividing the Ganseon Road line into east and west, and then placed one battalion in each area. Then he placed a fleet of tanks to the south of each area. Colonel Michaelis then ordered his men to plant mines ahead of the front lines. As a last line of defense, the colonel set his artillery units. Everyone involved reacted to his orders quickly and efficiently.

When Colonel Michaelis visited the sites, he gave concise instructions to the battalion commanders and the tank company commander. He drew a clear line of defense around his troops and moved ahead to his next task only after checking the duties and locations of each of his officers.

I continued to follow Colonel Michaelis around. It was a joy to watch him direct his men, but it was also a learning experience for me. I could not help but be impressed by the efficient manner in which he got things done. His preparation and planning methods, and the mechanical yet precise movements of his men, reminded me of the power of the U.S. Army.

After about two hours, Colonel Michaelis was done directing his men. He then entered a large sewer that had been constructed to direct water downstream. The entrance had large stacks of sandbags on each side. This was Colonel Michaelis’ command post. When I asked him why he had selected such a place for his command post, he replied with a smile: “Look how strong this place is.”

Most command posts at the time were set up in abandoned buildings or in other convenient settings.

After we parted ways, I rode my jeep back to my command post. During the bumpy ride back, I thought about what I had seen during the day. Although I had been assigned to the Battle of Dabudong in haste, I felt I needed a lot more time to think things through. We were preparing for a large-scale joint operation with the Americans, and I was excited about all there was to learn from our American allies.