Battling it out on the football pitch

Battling it out on the football pitch 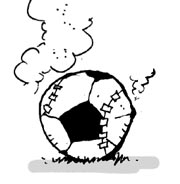 Among the eight countries that advanced to the quarterfinals of the 2010 World Cup in South Africa, it is incredible that the national teams of four South American countries — Brazil, Argentina, Uruguay and Paraguay — were all included. All four of these countries share a tragic history in which hundreds of thousands of their people died needlessly over a century ago.

The War of the Triple Alliance which took place between 1864 and 1870 was instigated by the ambitious Paraguayan dictator Francisco Solano Lopez, who thought of himself as a Latin Napoleon. After Brazilian troops invaded Uruguay, Lopez decided to declare war on both Brazil and Argentina.

While the well-prepared Paraguayan military fought well against the two nations early on, Lopez lacked diplomatic skill and managed to turn Uruguay against him. Instead of having to fight against just two nations, Paraguay had to face the Triple Alliance of Brazil, Argentina and Uruguay.

In 1869, Paraguay’s capital of Asuncion fell into the hands of the Triple Alliance, and the war ended in 1870 when Lopez was shot to death as he fought alongside the remnants of his army on the northern frontier of Paraguay.

The result of Lopez’s reckless war was devastating. Between 90,000 and 100,000 soldiers and civilians were killed on the Alliance’s side, and the population of Paraguay, which was 520,000 before the war, was reduced to 220,000 by its end. Most of Paraguay’s male population was killed. Historians estimate that after the war only 28,000 males were left.

As I watched the South American teams compete in the quarterfinals this past weekend, I couldn’t help thinking about the War of the Triple Alliance. The aggressive competition and nationalism that permeated the matches left me thinking that the footballers were re-enacting their historic conflicts on the pitch.

Of course, one doesn’t need to look as far as South America to find examples of the residual bitterness of history being played out on the field. While Japan and Korea have friendly relations today, whenever their national teams compete on the pitch, old tensions flare up. By playing against one another, however, the nations build good sportsmanship and trust.

American anthropologist Richard Sipes said in 1973 that sports games like football could be used as an alternative to war, as they could reduce tensions between the main agents of aggressive conflicts.

In the 1970s, the United States and China benefited from such thinking. The U.S. administration’s strategy of “Ping Pong Diplomacy,” which involved American table tennis players competing in China, led to a thaw in U.S.-China relations during the Cold War. We should remember the many lives lost to senseless conflicts the next time tensions rise, and consider the benefits of battling it out on the pitch.