Bigwigs in North vie for power over investments

Bigwigs in North vie for power over investments 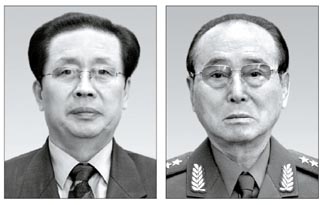 Two men near the top of the North Korean power structure are competing against each other to become foreign investment czar for the cash-strapped country, according to sources with knowledge of North Korea.

“O Kuk-ryol dominated the foreign investment coming into the North because of his military power,” said one of the sources, “but he is in a hegemony struggle in that area with Jang Song-thaek, who thrust himself into foreign investment promotion later than [O Kuk-ryol].”

Jang is the husband of Kim Kyong-hui, Kim’s younger sister, and is one of Kim’s close confidants. Jang was also promoted to vice chairman of the National Defense Commission on June 7 at the Supreme People’s Assembly.

The sources said O, since being appointed a vice chairman of the National Defense Committee in February 2009, has capitalized on his position to expand his influence in attracting foreign investment.

O and his aides established Choson Kukje Sanghoe (Korean International Trading Company) as the organization solely responsible for foreign investment promotion and received approval for the organization from the presidium of the Supreme People’s Assembly on July 1, 2009.

The company initially belonged to the cabinet, but Jang absorbed it into the National Defense Commission and announced the establishment of the re-purposed company in a January 20 report from the official Korea Central News Agency. The news report said Kim Jong-il issued an “order” that the state guarantee that Taepung be able to attract foreign investment.

“O Kuk-ryol is very displeased that Jang jumped into the foreign investment business that he led,” said the sources. “Currently, Choson Kukje Sanghoe and Korea Taepung International Investment Group are vying against one another.”

The sources said that the power struggle is already being watched with concern by the State Security Department, the North’s supreme intelligence agency.

The agency, the sources said, suspects that China is behind Taepung and is trying to control the North Korean economy by injecting capital through Park and the group. The sources said the agency is hesitant to report its suspicions to Kim, given his close relationship to Jang.

Jang has cultivated power through economic projects Kim has entrusted him with, such as a project to build 100,000 houses in Pyongyang. Since he was promoted to vice chairman last month by Kim, he is thought to have increased his political clout as well.

“If a rivalry between Jang Song-thaek and O Kuk-ryol, both key axes of North Korean power, becomes a full-fledged power struggle, it could have a subtle effect on a North Korean succession scenario,” said Kim Yong-hyeon, professor of North Korean Studies at Dongguk University.