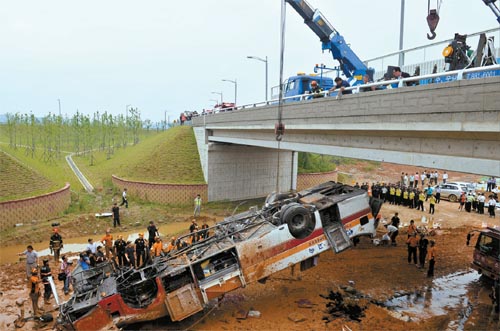 Rescue workers try to salvage a crashed bus in Incheon Saturday. Police said the bus careened off a bridge as it was heading to Incheon International Airport, killing 12 passengers and injuring 12 others. [YONHAP]


An express bus carrying two dozen people to Incheon International Airport plunged off a bridge, killing 12 people and injuring 12 others, including the driver, police said.

According to Incheon police, who conducted an on-site inspection yesterday, the bus crashed through a guardrail as it tried to avoid an incapacitated Daewoo Matiz in the middle of Incheon Bridge and plunged 10 meters (30 feet) at 1:19 p.m. on Saturday. Photos and television footage showed the severely wrecked bus lying on its roof below the bridge.

Investigators said the driver of the Matiz had engine trouble and stopped her car in the middle lane of the three-lane-road. The driver, surnamed Kim, 46, got out of the car, walked to the shoulder of the road and called her insurance company.

A 1-ton truck proceeding in the middle lane abruptly swerved to avoid the Matiz but ended up crashing into it and hitting the wall dividing the two parts of the highway.

A few seconds later, the bus tried to avoid the vehicles blocking two of the lanes, but hit the Matiz and crashed through the guardrail.

Police said the Matiz driver turned on her emergency blinker lights but didn’t take other safety measures, such as putting a reflective warning tripod behind her car.

“According to traffic laws, Kim should have put a warning tripod 100 meters behind her car on the highway,” Son said. “When the Matiz passed the tollgate the driver noticed there was something wrong, and parked on the shoulder of the road. A tollgate worker told her not to drive until it was fixed, but she insisted on proceeding and her car stopped again [after 300 meters].” The bus and truck passed the tollgate leading to the bridge within seven seconds of each other, and Son said the bus driver bears responsibility for “neglecting his duty to watch ahead and failed to maintain safe distance from the truck, and that’s the core factor that raised the death toll.” Police submitted blood samples from the drivers to the National Institute of Scientific Investigation on Saturday to check whether they were driving under influence and will announce the results soon.

Korea’s No.1 steel maker, Posco, lost one of its best iron ore mine experts, Lee Si-hyeong, 45, who was going to Australia for a business trip.

Lee was accompanied by his boss, Seo In-guk, another ore expert, who’s in the hospital.

Lee worked for 10 years at Gwangyang mill, and his company sent him as a visiting scholar for two years to the University of New South Wales in recognition of his abilities.

“We just lost a great man,” an official with Posco said.

The accident orphaned a 7-year-old boy, Lim Seong-jun, after his parents, his 3-year-old sister and 10-year-old brother were killed.

The boy’s father, Lim Chan-ho, a computer science professor at Gyeongju University, was remembered by many students as being enthusiastic and caring.

“He’s one of the professors who received top evaluation scores in lecturing and he was a good son of his parents in Seoul,” said Lim Gil-taek, dean of the university’s computer science department.