Mission over for unit that cleared people’s names

Mission over for unit that cleared people’s names 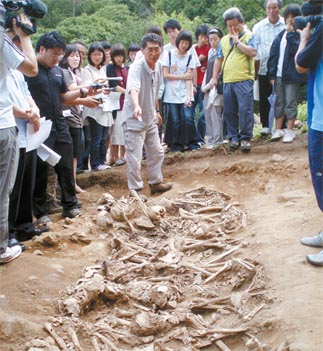 Lee Sang-gil, a professor at Kyungnam University, briefs media in 2008 about the “Oegongni Incident” in South Gyeongsang, in which hundreds were killed after being called North Korean spies. Provided by the commission

The office of the Truth and Reconciliation Commission, located on the third floor of a building in Chungmuro, central Seoul, is anything but posh. Occupying two small cubicles right off the elevator, the scantly furnished office welcomes a visitor with dim lighting and a narrow entrance.

But over the past four years, the commission has assisted some of the most needy and ill-treated Koreans who had nowhere else to turn to for help, and is now considered one of the most successful and well-regarded government initiatives in decades.

And last Wednesday, that narrow portal to truth and justice closed its doors.

The commission, which had the mission of correcting human rights violations from the past, wrapped up its investigations of four years, two months and five days. Its 202 administrators and inspectors in the field will occupy the offices until the end of the year so they can write a final report detailing their work.

“Look at the amount of documents here,” said an official of the commission, pointing to the pile of papers on his desk. “Six month later, these will be turned into a single report. It’s a whole lot of work.”

The commission couldn’t possibly investigate all human rights violations from the past. The special act that created it stipulated that the work would be limited to human rights abuses reported between Dec.1, 2005, when the commission was created, and Nov. 30, 2006, although the abuses could date from any time earlier.

Still, as many as 10,860 human rights violations that would have fallen into obscurity were reported and investigated.

The official said he feels happy that the commission could help vindicate people who suffered abuse, or who suffered under unjust charges. But, he said, “I am sorry that there are still people out there giving up hope that a day will come when justice is done.”

Before the commission started, some of the well-known tragedies of modern Korean, such as the Gwangju Democratization Movement, which was crushed through a lethal crackdown by the Chun Doo-hwan military regime, and the No Gun Ri massacre, the wartime killing of refugees by the U.S. military, had been investigated by the government on a case-by-case basis. But there was no comprehensive approach to examining human rights violations. The commission was launched to do just that by the Roh Moo-hyun administration.

And surprisingly, that vaulting ambition has been achieved.

After its investigation, the commission disclosed that the suspicious death of Park Jong-cheol, a Seoul National University student who attended an anti-government rally in 1987, was due to a harsh government interrogation. The commission urged the government to apologize to the victim’s family.

Gang Dae-gwang, a fisherman who was abducted and released by the North and then punished by the South for being a North Korean spy, was also vindicated.

But the most tangible success was the shedding of light on many unknown No Gun Ri-type killings of people branded communists during the Korean War.

According to the commission, more than 100,000 South Koreans were executed by the South Korean government and the U.S. military for helping communist North Korea during the Korean War.

As of March, the commission unearthed 1,617 bodies of those killed for being “North Korean sympathizers.”

From Aug. 5-26, 1950, the right-wing paramilitary and the government killed around 870 people in 10 cases in Ulsan after falsely accusing them of being North Korean allies, according to the findings of the commission. Kim Jeong-ho, a 63-year-old resident of Ulsan, lost his father in such a killing. His father was 25 at the time.

“I remember my grandmother telling me that father is not coming home after the police took him,” he said. “A few days later, we heard that he died - not just died, but died as bbalgaengi. A few years later, when I learned what that means, I was so ashamed.” Bbalgaengi is a derogatory term for a communist.

Being labeled “a son of a bbalgaengi” shadowed Kim’s entire life. Kim said he could not even dream of applying for a job at a large company because he knew the government classified him as coming from a communist family to keep him from ever acquiring a major position in society.

Kim was an only son, which exempted him from military duty, but he heard from relatives that they suffered from discrimination in the military, such as being excluded from duties dealing with national security information. In 2006, Kim’s lifelong shame ended when the commission ruled that his father had been wrongfully killed. “It was like opening a whole new world to me,” Kim said. “I am grateful to the commission for that,”

Many of the victims helped by the commission, as well as their families, telephoned the office to express their thanks. Some visited the offices, and others came with gifts.

One grateful person from Haenam, South Jeolla, who had been falsely maligned by the government and vindicated by the commission, came to its offices last year and tried to hand an officer an envelope with cash inside. The inspector explained he couldn’t accept it, and sent him home.

“A few days later, a package came from him, a box of abalone. I also sent it away,” the inspector said. “He called and complained about his presents not being accepted, but I said, ‘The feeling from your heart was received.’ And it really was.”

The vindication by the commission, however, is not full. Its conclusions and recommendations for the state to compensate human rights abuse victims have no legal force. The only way the families or victims can get compensation is to take the state to court. But, many of the lawsuits have dim chances because of the statute of limitations of the laws. Kim from Ulsan is leading families of 181 No Gun Ri victims in a suit against the government, but is waiting for a Supreme Court ruling after an appeals court ruling, which cited the statute of limitations.

The commission has proposed to the government that the statute of limitations should be suspended or eliminated for its cases, but hasn’t received a response.

Another problem is what happens now that the commission has finished its work.

The commission’s proponents say there are many cases of people wrongly accused of crimes who have missed the deadlines but should still be given a chance to clear themselves or their families. They also say the commission should continue being a watchdog for state wrongdoings in the future.

Kim Dong-choon, a sociology professor at SungKongHoe University who was formerly a commissioner of the body, said that possibility is dim.

If the commission is to become a permanent organization, Kim said, the government and lawmakers have to pass new laws to give it legal standing. Given the conservatism of the current government and the attitude it has shown toward this commission, it would be unlikely to happen, Kim said.

“The truth should never be silenced,” he said, “but I am afraid it will be, once more, for Korea.”