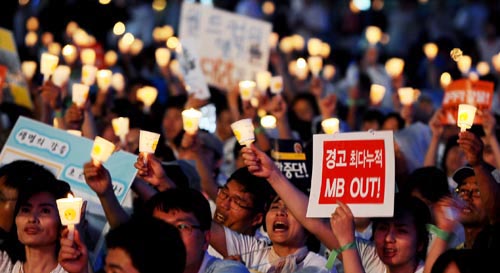 It was the first time in two years that people with candles poured into Seoul Plaza as they did in 2008 to rally against President Lee Myoung-bak’s decision to resume U.S. beef imports.

“We can save a tremendous amount of government money if the four rivers restoration project is halted,” DP head Chung Sye-kyun said. “With that money, we can create jobs to ease youth unemployment and it can also be used to convert temporary workers into regular workers.”

The alliance has designated July as protest month and encouraged participants to join nightly vigils starting at 7:30 p.m. at the Cheonggye Stream.

Police dispatched some 900 police officers in case of violence, but the rally ended peacefully at 10:10 p.m.

Less than a week ago at the National Assembly, the Democratic Party and other opposition parties successfully defeated Lee’s plan to develop Sejong City into an education, science and business hub instead of a mini-capital city. Political observers say the opposition’s focus is now entirely on ways to block Lee’s four rivers project.