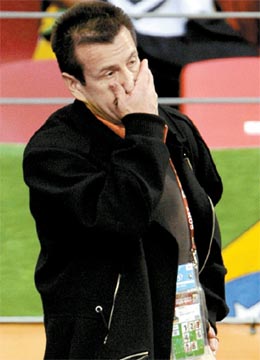 “The cycle of work started in 2006 and which culminated with the elimination of Brazil in the World Cup in South Africa is finished,” said a statement.

“The CBF announces the dismissal of the technical commission of the Brazilian team. The new commission will be announced at the end of July.”

Dunga, 46, who skippered Brazil to the 1994 World Cup, had been national team coach since 2006. He had already said that he intended to step down after four years following the five-time champions 2-1 defeat to Holland in the quarterfinals in Port Elizabeth in South Africa on Friday.

However, on his arrival home on Sunday, Dunga did not rule out staying in the job.

“I am going to rest before meeting, in one or two weeks’ time, the president of the CBF, Ricardo Teixeira, to talk about it [extending his stay in charge],” Dunga told a news conference before the CBF quickly shattered his optimism.

Brazilian players were met with insults and pushing and shoving from angry fans amid a welter of recriminations for their poor World Cup showing when they arrived in Rio.

Aside from Dunga, the target for much of their ire was Felipe Melo, who deflected in Wesley Sneijder’s opener for the Dutch and then got himself sent off.

The Brazilians landed after a 10-hour flight from South Africa and fans immediately vented their anger, judging Melo as one of the “fathers of defeat.”

Protected by bodyguards, the Juventus player had to run for the cover of his father’s vehicle after supporters left him in no doubt as to their displeasure - even though the players were taken through a side door to avoid potential angry hordes at the main exit.

Fans were more forgiving with goalkeeper Julio Cesar with some shouting out their gratitude for what they saw as a good showing overall by the Inter Milan shot-stopper who was tearful after the Dutch defeat.

“I am very emotional - I want to thank the Brazilian fans. This was the fruit of three-and-a-half years of work,” said Julio Cesar before being driven off along with his mother.

Jose Kleberson, Gilberto Melo, Juan Santos and Thiago Silva also had to run the gauntlet along with team doctor Jose Luiz Runco and technical assistant Jorginho. The remainder of the squad carried on to Sao Paulo.

Runco admitted that star midfielder Kaka, who failed to shine at the World Cup, was not properly fit and wouldn’t have played at a lesser event.

“Maybe in other situations Kaka would not have played even the World Cup, but he really wanted to be there,” said Runco.

Kaka came into the tournament on the back of a disappointing season with Real Madrid who was marred by thigh problems which forced him to miss more than six weeks of the season. And when he did play, the 65 million-euro summer signing from AC Milan did not hit the heights.

“I suffered a lot since I got injured,” the 2007 world and European footballer of the year told journalists.

Fans were not impressed and whistles and jeers were aimed in his direction during Real’s defeat by Lyon in the last 16 of the Champions League in March. But he shrugged it all off.

“They did it in Sao Paulo, Brazil, with Milan ... it happens to all players. The fans are very emotional,” he said.

Kaka failed to score in the World Cup and was also red-carded, albeit unjustly, in the group win over Ivory Coast.