Modern classics of ballet in Seoul

Modern classics of ballet in Seoul 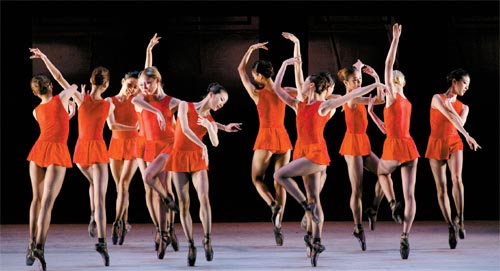 A scene from “All Shall Be” by Heinz Spoerli, which features the music of Bach. It was premiered in Seoul by UBC in 2003. Provided by UBC

The Korea National Ballet and Universal Ballet Company, two of the nation’s major ballet companies, are staging a handful of renowned modern ballet pieces in Seoul next week.

The Korea National Ballet’s “A Night with Roland Petit” offers the Korean premieres of three different pieces by the legendary French choreographer and dancer, who was born in 1924. The three works - “L’Arlesienne,” “Le Jeune Homme et la Mort,” and “Carmen” - are currently part of the repertoires of the Paris Opera Ballet and La Scala Theater Ballet. The performance is part of a five-year deal Petit signed with the Korea National Ballet. Under the agreement, his staff will travel to Korea to assist with training dancers and staging the works.

Born in Villemomble near Paris, Petit trained at the Paris Opera Ballet School and established the Ballets de Paris de Roland Petit in 1948. Since then, he has choreographed some 60 pieces that have been noted for being angular, acrobatic and theatrical. He also makes use of singing and props, such as cigarettes and telephones, in his works.

Of the three pieces to be premiered here, “Le Jeune Homme et la Mort,” an existentialist masterpiece known in English as “The Young Man and Death,” will resonate with audiences familiar with the 1985 Hollywood film “White Nights.” The movie features a portion of the one-act ballet in its opening scene, which includes a performance by Mikhail Baryshnikov, one of the most acclaimed dancers of the 20th century. The movie was so popular here that it attracted 360,000 Korean moviegoers in 1986. 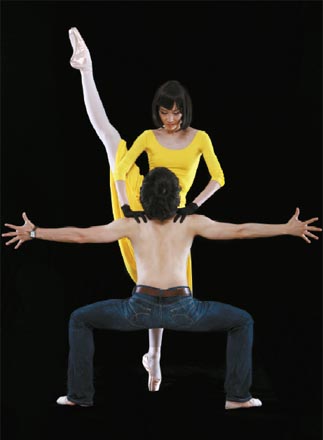 A scene from “Le Jeune Homme et la Mort,” which will have its Seoul premiere Seoul next week. The piece is about a young man driven to suicide by his femme fatale lover. It is based on a Jean Cocteau poem and was choreographed by Roland Petit. Provided by KNB

In the 20-minute ballet, based on a script by French poet Jean Cocteau, a young man is driven to hang himself to death by his femme fatale lover. Petit created the piece when he was 20.

Meanwhile, the Universal Ballet Company will also show three modern ballet works in a program called “This is Modern” that the company says it hopes will emphasize the lighter side of ballet.

“People who think that ballet is boring or elitist should be able to break their prejudice with this project,” said the ballet company’s spokeswoman.

As part of the company’s efforts to make ballet more accessible, some of the dancers appeared in Gwanghwamun Plaza in central Seoul late last month to promote the performance.

The company says it has chosen three works popular with Korean audiences: “All Shall Be” by Heinz Spoerli of the Zurich Ballet, “In the Middle, Somewhat Elevated” by William Forsythe of the Forsythe Company in Frankfurt and “Minus 7” by Ohad Naharin of Israel’s Batsheva Dance Company.

“The strictness and fairy tale-like fantasy observed in classical ballet don’t exist in modern ballet,” the UBC said in a press release. “The essence of modern ballet is about the familiar music, dynamic movements and unique choreography that reflects the individual personalities of the creators.”

“A Night with Roland Petit” runs from July 15 to 18 at the Seoul Arts Center’s Opera House in southern Seoul. Those who attend the performance on July 16 will receive a 50 percent discount that is being given in celebration of Korea’s advancement into the Round of 16 at the 2010 FIFA World Cup. Ticket prices range from 5,000 won ($4) to 120,000 won. For more information visit www.sac.or.kr.

“This is Modern” runs from July 16 to July 18 at the Universal Arts Center in northeastern Seoul. Tickets range from 10,000 won to 60,000 won. For details visit www.ubcballet.com.