[Viewpoint] How to charge for the news

[Viewpoint] How to charge for the news 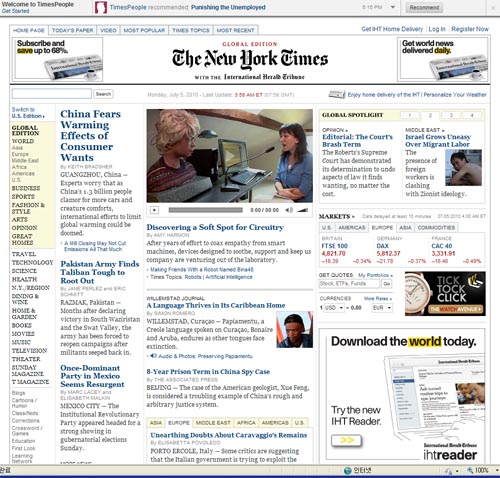 The home page of the New York Times. The newspaper announced in January that it would charge some readers for access to its Web site beginning next year.

Hal Varian, the chief economist at Google Inc., spends a lot of time talking about the economic state of the news business, partly at the behest of the Federal Trade Commission, which wants to know how free online access has contributed to the financial difficulties of dozens of newspapers such as the Rocky Mountain News, Los Angeles Times and Chicago Tribune.

That Google has anything constructive to say may seem counterintuitive given that many folks who run large news organizations - News Corp.’s Rupert Murdoch, for instance - say that Google and its search engine are the principal cause of the declining advertising revenue at most print publications.

Varian has never run a business. His main credential in the debate is the book “Information Rules” that he wrote in 1999 with Carl Shapiro, a fellow professor at the University of California at Berkeley. In it, Varian and Shapiro apply durable business and economic rules to the Internet with particular attention to the value and pricing of information. So while he’s no newspaperman, he has given the economics of news considerable thought.

If he had to choose a newspaper to run successfully, it would either be one with a rich audience - such as that of the New York Times - and unique content, or the hometown paper with compelling news and local ads. “The hopeless case to me is a newspaper filled with generic, widely available content,” he said in an interview.

Both models have something in common: they sell information that’s not available elsewhere and that is targeted to a particular audience. While one source of revenue comes from advertising directed at this audience, there’s no reason why content producers shouldn’t charge consumers as well. That’s called subscription. It’s something publishers have been doing for decades.

How much, where and when is determined by the competitive environment and how well a producer can distinguish his product in the mind of the consumer. That will be the challenge of the New York Times when it begins charging for online access next year.

“The issue is not how much people value access to a particular newspaper, but whether comparable content is available elsewhere for a cheaper price,” says Varian.

Perhaps the most brilliant practitioner of getting people to overpay in a world of cheap knockoffs is Louis Vuitton, the luxury goods maker.

Louis Vuitton never goes on sale and charges $1,000 and up for a printed, plastic-coated canvas handbag. Last year, the company recorded revenue growth of at least 10 percent. Parent LVMH Moet Hennessy-Louis Vuitton SA earned almost 2 billion euros ($2.5 billion) on 6.3 billion euros in revenue from fashion and leather goods purely via the allure that items sold in its shops were authentic artistic statements worth multiples more than very good copies found on the street corners of New York City.

Why content creators, in particular newspapers, ever succumbed to the notion that they should forever give away their product online seems one of those odd, lemming-like phenomena akin to the “irrational exuberance” that preceded the dot-com stock market crash. Lured by the siren song of having an infinite audience via electronic distribution, publishers forgot that it meant infinite ad inventories whose price is rapidly approaching zero. Traffic was everything.

As John Malone, the cable television billionaire and head of Liberty Media Corp., says, “Traffic ain’t money.” Liberty’s own Internet investments have been concentrated on e-commerce sites or those with subscriptions, such as Bodybuilding.com, QVC and Right Start. “The ad-supported model has been in decline for awhile,” says Liberty CEO Greg Maffei.

The main beneficiary of all this free content on the Web has been Google, which has invented thus far the best solution to sorting information and matching it with people who want to find it. Just like the publishers, Google makes its money by selling ads next to content, except Google’s search engine is much more efficient and its content costs are zero. Facebook Inc. is next in line to do the same thing, only it’s using content that users generate.

Google vs. the New York Times

This competitive advantage becomes obvious when looking at the operating margins of Google versus the New York Times Co. Google: 35 percent. New York Times: 5.4 percent, according to data compiled by Bloomberg.

It’s no wonder that Google and Facebook are suddenly courting publishers, recognizing that if news devolves into a world of screaming blogs, there will be less and less valuable content to place ads against. More worrying, perhaps publishers will decide to ask Google and Facebook to pay for access just as they do their print and Internet syndication partners. Murdoch’s London Times and Sunday Times already block Google News from aggregating content from its Web site. Both papers went to a pay model July 2.

It is only rational that publishers are now deciding to charge online users just as they charge print customers. One might argue that if a New York Times print subscriber is willing to pay $300 a year for day-old news, the online subscriber who gets breaking news, blogs, slide shows, video, personalized stories and a slew of other advantages (how about throwing in real-time stock prices?), may be willing to pay even more.

Give that online subscriber an iPad or other electronic reader for free and you’ve got the same model that the mobile telephone operators have been using for years. New York Times executives say after two years, their subscribers are hooked for life. About 800,000 out of their 950,000 print subscribers fall into this category. If you could get them to pony up for a two-year subscription in return for an Apple iPad, that might work. Online subscription plus better ad targeting could do a lot to improve the bottom line of many newspapers. Or at least keep them in business.

Publishing, in particular the newspaper business, has always been more about gaining influence than making money. Law, banking, medicine and, these days, software development, have always been more stable and more lucrative than newspapering.

Journalism as a serious profession, rather than a craft, developed after World War II when economic growth created a boom in the ad business and television brought announcers into the living room. Even now, plenty of would-be writers are willing to work for free on the chance that they become famous and hit the jackpot. Few do.

My great uncle, Fred Guyon, was a reporter and editor in Oregon during the beginning of the last century. He owned a newspaper for awhile, sold it and made no money on it. He never got paid more than $45 a week, the equivalent of $30,000 a year today. He didn’t marry, had no children and “retired” in his mid-50s, spending the rest of his life ambling about town and reading French in the public library.

He died in 1981 at the age of 91 at Garber’s University Nursing Center in Eugene. The Register-Guard wrote a couple stories about him, one while he was alive, another when he died. Someone tried to get him a posthumous degree in journalism.

It didn’t cover the cost of the funeral.