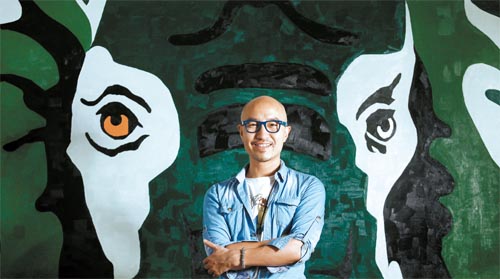 Actor and restaurateur Hong Suk-chun stands in his new restaurant, Play, near Hongik University in western Seoul. By Jeong Chi-ho

Lounging on a balcony seat in his fashionable new restaurant, Play, in western Seoul, it seemed nothing could faze Hong Suk-chun as he welcomed the afternoon sunlight with a lingering puff from his Parliament cigarette.

“It might sound conceited of me, but my restaurant business hasn’t been affected by the global economic crisis at all. All of them are doing quite well,” he said on a recent afternoon during a one-on-one interview with the JoongAng Daily.

Clad in a casual sky blue shirt and matching glasses, Hong looked every bit the young, successful entrepreneur that day in his roomy, bistro-style restaurant complete with vibrant art and tall, open windows. It was a far cry from just a decade ago, when Hong, the first Korean public figure to come out as gay, became a target of almost every conservative religious group in Korea, a country with strong Confucian and Christian traditions.

Last month, Hong celebrated the 10-year anniversary of his coming out at the 2010 Korea Queer Culture Festival held near Cheonggye Stream in central Seoul.

“Oh, it [coming out] felt like the biggest thing on earth,” he said, chuckling at his dramatic past as if it were a distant rumor.

“My manager, the reporter [who broke the story], the head of the newspaper bureau, my parents and I all gathered inside my house and had a meeting on whether or not to print my coming out article.” 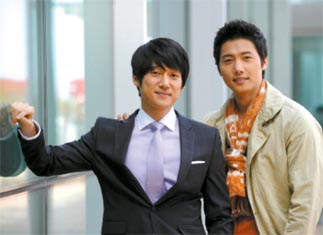 The SBS TV drama “Life is Beautiful” is the only program airing on Korean television with a plot featuring homosexual love. Provided by SBS

In 2000, Hong Suk-chun made a decision that changed the course of his adult life. He had just broken up with his Dutch boyfriend in New York and was on a plane to Seoul. The new millennium was beginning, Hong had just turned 30, and he was starting to feel like a caricature of himself.

“When we [Hong and his former boyfriend] were together, he would always complain about the fact that I always introduced him to friends and acquaintances in Korea as my English teacher or as just a friend. I was a celebrity - I couldn’t help it,” he said.

“On a plane ride back to Seoul after our break up, I decided right then and there that I would live the new millennium as myself and that I had to come out publicly.”

The moment of truth came while Hong was appearing on an entertainment show, when a comedian friend asked jokingly whether Hong preferred men over women. “I thought for a few seconds and responded truthfully,” he said.

Although the show’s producer decided to edit out that part, a reporter found out about the incident and approached Hong for an interview. He agreed and has never looked back.

Even after being fired from all six of his shows on TV and radio, including the popular children’s show “PpoPpoPpo,” Hong firmly states that he had no regrets.

Still, he said, “I was devastated. I received e-mails with death threats. My career was over, and I didn’t leave the house for a month. I started smoking and smoked three packs a day in those days.” 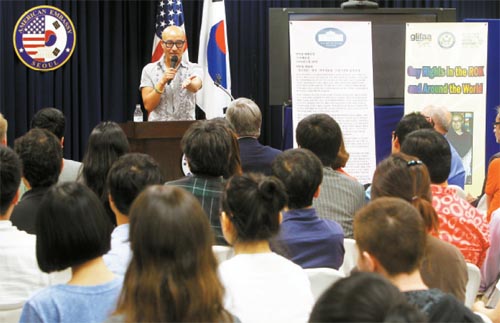 Hong Suk-chun speaks to a group at the American Embassy of Korea’s Information Resource Center in Namyeong-dong, Seoul, during a human rights conference hosted by the U.S.-based Gays and Lesbians in Foreign Affairs Agencies in May, where he was given the “Person of Courage” award. [YONHAP]

After a month of hiding from the world, Hong made another decision to come out again - this time, to face the public.

“I looked at my face in the mirror one day and it was so ...” He flattened his cheeks with his hands. “And I thought, this is what they want me to be - ruined. So I went outside, walked around Myeong-dong and Dongdaemun and rode subway trains,” he said.

He jokes that in a way, it was one of his very “Korean” traits that pushed him to do so.

“You know how Koreans put forth a different face in times of crisis? Well, in that respect, I was the typical Korean. My original plan was to go to New York to study after I came out, but the public’s anger and hatred made me unyielding in a way. If their response had been more favorable, my restaurant business wouldn’t have happened.”

With no acting roles for him available, Hong invested around 180 million won ($147,000) to open his first restaurant, Our Place, in October 2002. For the first 14 months, Our Place failed to break even and Hong lost around 10 million won a month. The restaurant, a narrow, three-floor space in Itaewon, was obscure. People even started calling it a gay bar.

Yet diligence and a close network of friends saved the restaurant, which started to become a popular spot for small, friendly parties. Soon afterwards, Our Place became the “it” venue for farewell parties, birthday parties and other events for trendy Seoulites.

Second success as a restauranteur

On the heels of Our Place’s success, Hong opened My Thai near the Hamilton Hotel in Itaewon in June 2007. At present, he owns or co-owns a total of seven restaurants: six in Itaewon and Cheongdam-dong, and one, Play, in Hongdae. Hong’s “My” series includes My China, a Chinese-fusion restaurant; My Bed, a lounge bar; and My Chelsea, among others. His newest restaurant, Play, is a joint operation with actress and close friend Lee Seung-yeon.

Hong said that he earns an annual profit of over 1 billion won from his restaurants. The secret to his success, he said, is his down-to-earth attitude in dealing with customers.

“When I’m in my restaurants, I try to forget that I am a celebrity. When I look at other restaurants run by famous people, I think that the fastest way to failure is being arrogant and wanting to be treated like a celebrity,” he said.

Asked which restaurant reflects his personality the best, he answered My Thai.

“When I opened My Thai, I was trying to introduce a fairly unknown cuisine in Korea, Thai food, but I did it in a way that would be Korea-friendly and was very careful not to make overtly ‘Thai’ food when creating the menu,” he said. “You see, people viewed me the way they view Thai cuisine - unfamiliar and unapproachable. Through My Thai, I began to open my heart to other people.”

No one by his side

In 2004, Hong’s activism for gay rights was recognized by Time magazine, which featured him as one of 20 “Asia’s Heros” under 40. Last year, Hong gave an honorary speech during the World Out Games 2009, a sporting event organized by the gay community held in Copenhagen, Denmark.

Yet, despite Hong’s personal success after coming out and his prolific activism, no other Korean public figure of his stature has followed in his footsteps and come out. In fact, society is still so closed off to sexual minorities that a recent SBS TV drama, “Life is Beautiful,” which portrays gay characters and romance, caused the People’s Association Against Pro-Homosexuality Laws to run anti-homosexuality advertisements in the country’s biggest conservative newspaper, the Chosun Ilbo, from late May to early June.

“In Korea, public awareness and social backing for gays and lesbians are still extremely far off,” said Li En, an activist at the Korean Sexual Minority Culture and Rights Center. “Although Hong Suk-chun fought the tide and succeeded, we still remember when he was fired by all the broadcasters the day after he came out. In a country where an anti-homosexuality ad runs in the biggest newspaper, how many do you think will actually sacrifice everything they have to come out?”

Approached for a comment on the issue, an official at the Solidarity for LGBT Human Rights in Korea refused to comment, saying that the group does not speak to anyone affiliated with Korea’s “big three” newspapers - the Chosun Ilbo, JoongAng Ilbo (the Korean edition of the JoongAng Daily) and the Dong-A Ilbo - seen by many as conservative-leaning.

Struggling with his true calling

Hong said that since he came out, roles given to him on TV and in film have been unsatisfactory, to say the least.

After opening his first restaurant, his big comeback on TV was the 2003 drama “Complete Love,” in which he played a gay character. But it was greeted with a flood of hate mail from viewers, and since then, he has appeared in only a handful of TV dramas and shows. None of his roles has matched the scale of his stints pre-2000, such as his role as the fashion designer Poison in the hit sitcom “Three Men, Three Women,” which first catapulted Hong to national fame.

“I really liked playing Poison because he was so approachable and funny. But the people who give me roles now do not assign characters like that to me anymore,” said Hong. “They give those funny, commercial roles to other actors.”

With the exception of “Life is Beautiful,” gay roles on Korean television are still qualified. For example, this year’s popular TV drama “Personal Preference” tells the tale of a man who pretends to be gay to befriend a female roommate. Another hit TV drama “Coffee Prince,” aired in 2007, has a male protagonist fall in love with a “male” co-worker at a coffee shop who turns out to be a girl in disguise.

“The notion of gays on Korean television is more of a temporary trend than anything else at this point,” said Lee Dong-yeun, a cultural theory professor at the Korea National University of Arts.

“You see these young, attractive, straight actors playing gay roles in trendy dramas. They are chic and cool, and are closer to ‘metrosexuals.’ Korean TV is not ready to deal with homosexuality in a serious, creative light yet,” Lee said.

Still, Hong is hopeful. “Korea today has changed enormously from 10 years ago. Mothers come up to me in restaurants and say to their children, ‘Do you know what a great man this person is?’ And I think that those moments are my greatest compensation for what I have been trying to do.”

Even after all his success as a restaurateur and an internationally recognized activist, he says he still considers himself an actor first.

“If you ask me what my job is, I am still an actor and will be until I die. Yes, I am an actor who doesn’t have a lot of opportunities, but I believe it will get better,” said Hong, a weary smile on his face.