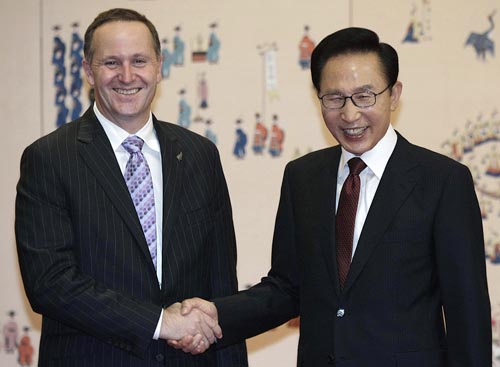 
Leaders of Korea and New Zealand vowed yesterday to deepen the countries’ economic cooperation particularly in the fields of energy, natural resources and infrastructure development.

President Lee Myung-bak and Prime Minister John Key of New Zealand held a summit at the Blue House yesterday and discussed a wide range of bilateral and regional topics, the presidential office said.

In April, New Zealand announced a massive investment to upgrade its telecommunication infrastructure with the aim of providing broadband access to 75 percent of the population within 10 years. Korean companies have sought to participate in the project.

A deal to liberalize bilateral trade was also discussed by Lee and Key.

“The two leaders discussed progress in the negotiations on a Korea-New Zealand Free Trade Agreement,” the statement said. “They reaffirmed their expectation to conclude the Korea-New Zealand FTA as early as possible. Both recognized the mutual benefits in working closely together towards enhanced trade and economic links and the opportunities existing for new trade in both directions.”

Ahead of the summit, the New Zealand leader also promoted the free trade deal to businessmen of the two countries. In a breakfast meeting yesterday hosted by the New Zealand Chamber of Commerce in Korea, known as the Kiwi Chamber, Key said the four rounds of negotiations so far had been successful.

“Korea is the seventh largest export market for New Zealand,” said Key. “A large number of Koreans come to New Zealand to study and visit. We thought about what we can ultimately do to grow New Zealand. We signed the FTA with Malaysia, Asean nations, and we were the first developed country to sign the FTA with China.”

For the deal with Korea, Key said he sees even more opportunities.

“We see Korea as an important market. We’ve been friends for a long time and we see great things here. We see quite a lot of opportunities. Not just big name companies like Samsung, LG, and Hyundai, but for other sectors such as telecommunications.”

On concerns of the impact the FTA may have on Korea’s agricultural market, Key said New Zealand doesn’t want to compete with Korea’s main products, such as rice and beef.

“And we can see the huge strength of the Korean economy,” he said.