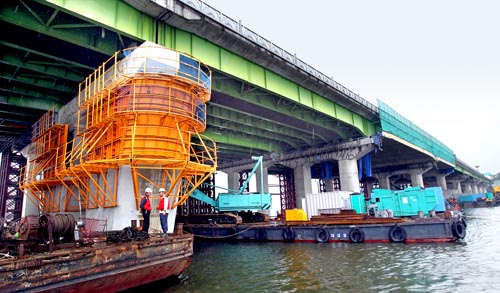 But his signature project, the West Sea Waterway, may not be as lucky.

Since the elections, Seoul’s city council is now controlled by the mayor’s political rivals from the Democratic Party, which won a landslide of 79 council seats out of 106. Heo Kwang-tae, the Seoul council chairman-nominee, made clear that he opposes Oh’s signature plan.

“[The council] will thoroughly investigate to show how the Seoul city government lavishly used its budget on the project,” Heo said last Wednesday.

But the biggest part of the plan is the West Sea Waterway project, to boost the Han’s linkages with the Yellow Sea and ports in China. Oh’s vision is to allow international freighters to ply the route, as well as ferry services in order to attract tourists.

Already, Seoul’s government was forced to put a temporary halt on a 58.2 billion won reconstruction plan for the Yanghwa Bridge after DP council members issued a statement on June 22 against the entire plan.

Reconstruction of the bridge, which began in April this year, will space out its narrow posts to allow 5,000-ton cruise ships to pass under the bridge. It is regarded as the first stage of the West Sea Waterway project.

According to the DP, the entire project is a waste of money.

Park Rae-hak, another city council member, said there’s “no economic benefit” in the project as it will take over 20 hours to get to Shanghai from Seoul (or vice versa) by cruise ship.

Furthermore, DP council members argued that a cruise will cost between 100,000 won and 200,000 per day and will only be attractive to wealthy travelers. They said it’s not right for the city to spend billions for the rich.

But DP members stressed they aren’t against all of Oh’s plans for the Han River and they support projects that are necessary or good for Seoul residents, such as recovering the natural ecology of the river and improving public use of the area.

“We aren’t against Oh’s idea of making access to the Han easier,” Heo said.

Oh said he will pursue his projects after discussions with city council members. “I will also set a direction for the West Waterway project after listening to opinions from the council as well,” Oh said last Wednesday.

Kim Kee-sung, former Seoul city council chairman, said, “It’s not appropriate to halt an ongoing project that was approved by the previous city council without looking into the economic benefits and goals of the project.”

“Unlike Europe, which has traditional villages and castles near rivers, there’s nothing much to see in Han River areas,” Yim said. “Offering cruises to attract tourists lacks efficiency and economic feasibility.”

Other experts warned city council members, mayors and governors to pursue policies to satisfy voters, not the interests of their political parties.

“They should think more of what would be of interest and benefit to residents,” said Chung Yoon-jae, professor at the Academy of Korean Studies.